Mad Men Season 4, Episode 5 Recap "The Chrysanthemum and the Sword"

There were two main themes in this week's episode of Mad Men ("The Chrysanthemum and the Sword"), and both center around the loose concept of societal change. It affects Don Draper the most; and as usual, he is the focus of the episode.

At work, the change revolves around the country's new attitude about Japan. In 1965, there were still millions of WWII vets and widows, and after only 20 years, much of the animosity toward the Japanese still lingered. Roger Sterling is one of those vets, and for him, nothing has changed. When Pete mentions that he may have scored a major client, The Honda Motorcycle Company, Roger throws a tantrum telling him he (Pete) may be too young to remember the war, but he wasn't; and there is no way he would do business with the Japanese.

But for the rest of the partners at Sterling Cooper Draper Price, business is business, and Honda controls 50% of the motorcycle market. They decide to proceed without telling Roger. The clash of cultures is glaring, and it makes for an awkward meeting between SCDP and Honda. It goes from awkward to embarrassing when Roger interrupts the meeting and proceeds to insult the Japanese executives. While on the surface it seems like the outburst was simple bigotry, Pete tells Roger that he thinks the deal was sabotaged just because he brought it in, and the deal could make the agency less dependent on Roger. I think Pete is basically right, and the other partners do, too.

Don thinks he has a way to salvage the deal, and he puts into practice something he read in a book about Japan called, The Chrysanthemum and the Sword (the same book all of the partners were supposed to read to learn about Japanese culture, but only Don actually did). In the process of possibly securing the major deal, Don also deals a fatal blow to a fierce competitor who has been nipping at his heels and stealing clients. A potential win-win. 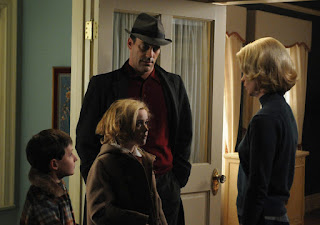 The other major change theme is the continuing toll the Draper's divorce is taking on their kids, and the growing acceptance of psychology for children. During an evening when Don has the kids at his apartment in the city, he goes out on a date and leaves the kids with his neighbor. Sally, who has been acting out quite a bit ever since Betty's father died, finds a few minutes alone and proceeds to cut her own hair. Badly. When Don returns home, he erupts at the babysitter, and worries about how much crap he will be getting from his ex-wife over this.

When Betty sees Sally's hair, she is furious and slaps her across the face. Both and Don and Henry think she overreacted, but Betty does not care. After Don leaves, she screams that she wishes he were dead. A few nights later at a slumber party, Sally is caught masturbating and brought back home. This appears to be the last straw for Betty, who selfishly views all of Sally's behavior problems as an attempt to embarrass her. After discussing the issue with Henry and Don (whose "bachelor lifestyle" she sees as the blame for Sally's outbursts), it is agreed that Sally will see a child psychiatrist.

By 1965, societal attitudes about seeing a therapist had changed a bit, and it was no longer someone's shameful secret. Betty had gone to one a few years ago, remember, and she turned out okay. But her sessions accomplished very little. She is still basically a bored housewife with some serious anger issues. In the preliminary meeting with the psychiatrist, the doctor actually recommends Betty see a shrink herself. Beyond a dirty look from Betty, that idea goes nowhere.

In other episode events, is there a possibility of a new romance between Faye and Don? In a revealing conversation, Faye admits that she is not really married, and that she wears a ring to avoid being hit on at the office. Why reveal that to Don? He hits on every skirt on the office! I wondered to myself while watching that exchange whether Faye wore the ring because she is a lesbian, and the ring helps her avoid being talked about or harassed. She does appear to be, at least at this point in time, able to withstand the Don Draper charm offensive. I am going to be paying special attention to this one.

It was good to see Betty back in the mix in this episode. Her character has only had minimal screen time this season, and I miss seeing January Jones. Things are still basically going badly on a personal level for Don, and it's hard to tell if his fling with Bethany will amount to anything, or if this Faye angle will be explored. The trailer for next week looks heavy on confrontation. That should be interesting.
Posted by Dave Splash