Has "Weeds" Gotten a Little Stale? 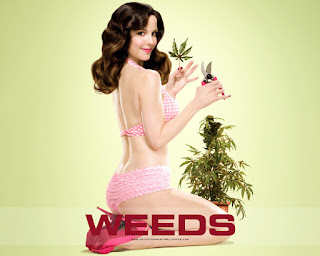 It pains me to say this, but it might be time for the hit Showtime series Weeds to call it a day. I watched the season six premier last night, and though I laughed a few times, was very disappointed. The storyline has has just gotten so blatantly ridiculous, and so far from what I originally liked about the show, that I question what the actual appeal of the show is to anyone now.

When Weeds began six years ago, the show was a lighthearted comedy about a suburban mom, recently widowed, who needed a way to earn a living to support her somewhat expensive, suburban lifestyle. That Mom (Nancy Botwin played by Mary-Louise Parker) ultimately turned to selling pot to suburban stoners young and old. But she had rules - a moral code. There was to be no selling to children. I guess that was the only rule. Anyway, her customers ranged from her friends to her attorney to members of the City Council.

As the show continued on, Nancy moved progressively up the pot food chain and met some bigger players in the illegal drug trade. She eventually found herself connected to a Mexican drug cartel, and that is where the show began to venture into the absurd.

Flash forward a season or two and now Nancy is married to the head of the Mexican drug cartel, who is also a successful politician in Mexico. The two had a baby. This, of course, was after Nancy ratted out the cartel to the D.E.A. While pregnant, Nancy worried that once the baby was delivered, she would be killed for her betrayal. Miraculously, she was not.

But the political ambitions of her politician/drug dealer husband Esteban are being held back by the fact that Nancy is a) not Mexican and b) has two older children. Esteban's political benefactor informed Nancy that her other kids might have to be killed in order to get more votes for Esteban's upcoming campaign. Then, seemingly out of nowhere, Nancy's younger son Shane kills the benefactor with a croquet mallet, and season five was over.

So, the new season starts with Nancy taking her kids on the run: away from the Mexican gangsters and away from the police. Nancy Botwin is easily one of the world's worst mothers, and her decisions in this first episode of the season only reinforce that. After picking up Andy (brother of Nancy's first husband) at the home of his ex-fiancee, the whole group hits the road with no particular plan in mind.

To me, the original focus of the show is lost in all this, and I just don't see how this could get any more ridiculous. Add that to the fact that Kevin Nealon's character, Doug, was not in the episode, and I just wonder if my DVR will be saving a spot for the rest of this season of Weeds. I'll give it two more weeks for my final decision.
Posted by Dave Splash