Fox News Is Pravda According to Sharron Angle 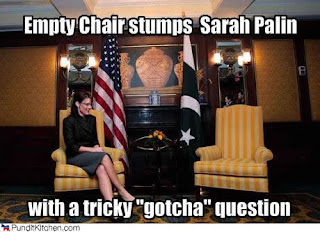 This brief clip below of Senate candidate Sharron Angle (R-NV) is very enlightening. It allows us "regular folks" to see inside the mind of a present day conservative, tea party candidate running for office. Ms. Angle, like Sarah Palin, refuses to give interviews of any sort or even answer questions from anyone other than ideologically approved media sources. So, Angle will only appear on Fox News or on right wing talk radio. She refuses to answer any serious questions or be challenged in any way. In the clip, she explains to Fox's Carl Cameron what she sees as the proper role of the media. "We wanted them to ask the questions we want to answer so that they report the news the way we want it to be reported, and when I get on a show and I say, 'Send money to Sharron Angle Dot Com,' so that your listeners will know that if they wanna support me, they need to go to Sharron Angle Dot Com."

Fascinating..."ask the questions we want to answer" and "report the news the way we want it to be reported"? Sounds like the old Soviet Union to me. So, Fox News is now Pravda? Well, I couldn't agree with you more, Ms. Angle. They do report the news the way you want it reported, and they let you solicit campaign donations right on air. For free. How convenient.
Posted by Dave Splash

Angle is such a loon.

I agree with Marquis. The problem is that Reid is a loon and an idiot.

Nice that conservatives have the same chance with Fox now that progressives have had with ABC, CBS, NBC, CNN, PMS-NBC etc etc for decades.

Except that the idea of a "liberal media" is a myth, and pretty much any objective analysis of media coverage in the last decade would bare that out. Fox is little more than the propaganda wing of the RNC.

I have to agree with Dave re. the "liberal media" thing. It might have been that way in the Seventies and Eighties, but not nowadays. Consolidation of the nation's media outlets and our short national attention span and craving for entertainment has pretty much seen to that. It has become corporate, not liberal.

Because the GOP strategy (often successful) is to always keep the Dems on the defensive, what we see in most newscasts is the talking head saying something about the Dems or Obama being accused of something, followed by a clip of the Republican doing the criticizing/accusing, and often times it gets left at that. Then if viewers are lucky they get to see a rebuttal from a Dem... but not usually.

"We wanted them to ask the questions we want to answer so that they report the news the way we want it to be reported..."

Eeeeek... that tells me all I need to know about Angle right there. Heaven help us if enough people with agendas like hers get elected to bodies as powerful as Congress.