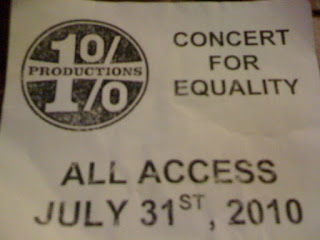 I spent much of yesterday and last night at the big "Concert For Equality" in downtown Benson. For this show, I was not merely an attendee, I actually worked at the show. I was right at the entry and tried to keep an accurate count of exactly how many people were at the show at any given time. The Conor Oberst envisioned/1% Productions executed show sold out far in advance, and by all accounts was a tremendous success. I didn't hear exactly how much money ended up being donated to the ACLU (and some civil rights organizations as well), but they had to be happy with the amount. 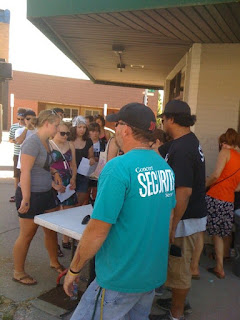 This is pretty much what I was seeing for most of the afternoon. The crowd was mostly young; and based on my brief conversations with a few who were there first, they were really excited for the Desaparecidos reunion. Me too. The sound check sounded awesome, and the set was even better. 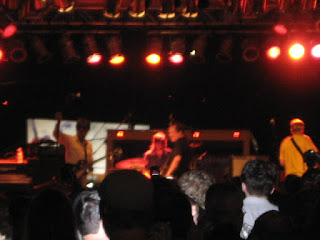 Because I was stationed at the entrance, I didn't take too many pictures. The shot above is from Cursive's explosive set. The band rocked harder than any time I had seen them, and were definitely the loudest band of the event. Tim from Lazy-I.com took more pictures than I did, his twitpics can be found here. Though the event was political in nature, and speakers from numerous civil rights organizations came on stage between bands, very few artists themselves were political while on stage. Cursive came out swinging, and directly called out the city of Fremont, Nebraska, and accused the supporters of the law of being racist. The crowd seemed overwhelmingly in agreement. 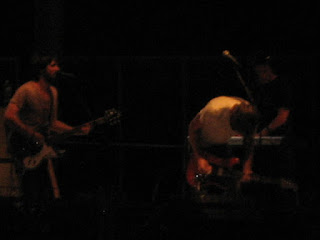 Bright Eyes performed earlier in the show, and played a short set that touched on many of the band's best singles. I was glad to hear "Lover I Don't Have to Love" back in the set. Conor Oberst also engaged in some on stage politicking, which was to be expected since he organized the concert in the first place.

A few hours later, Conor returned with his "punk" band Desaparecidos. I never saw the group in its brief, initial run back in 2001-02, so this was a first for me. The crowd freaked, and so did many of the (probably) jaded hipsters standing in the backstage area. Considering it had been eight years since they last performed together, it was amazing how perfect they sounded. They were tight as hell, and seemed like they had never stopped playing. It made me wish Conor would put the next Bright Eyes record on hold and try Desaparecidos again.

After the Desa set, I was ready to hit the showers. I had been on my feet all day, and I really needed to just sit and chill. At one point, I became Danny Glover in Lethal Weapon and thought to myself, "I'm Too Old For This Shit." So, I unfortunately missed the aftershow show inside the Waiting Room, and didn't see Lullaby For the Working Class. After Lullaby, during the "hootenanny" portion of the show, I also missed a second Gillian Welch set, and some additional Desaparecidos. As much as it sucks that I missed that, it felt really good to be away from crowds for a bit and take a freakin' shower. Call me an old fart? Guilty as charged, I guess.

There were a handful of protesters outside the concert, but their numbers were too small to really get any attention. Twelve angry d-bags with signs like "Deport Conor Oberst." Oh well, freedom of speech is for everybody. 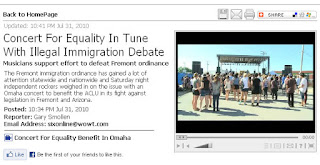 Local and national media was present. KETV Channel 7 filed a report and showed where they stand politically (hint: they aren't liberal). The headline reads, "Protesters Rally Outside Oberst Concert." Really? They rallied? There were 12 of them, and there were 2,000 attendees at the concert. Sounds like those twelve really were the story. WOWT Channel 6's headline was a little more neutral, "Concert For Equality In Tune With Illegal Immigration Debate." KMTV Channel 3's headline ("Oberst Protest Concert Draws Protesters") focused on the counter protest (as did Channel 7), but the story was better. The Omaha World Herald's "Indie Rockers Cheered in Benson" focused almost exclusively on the music at the concert, and only briefly mentioned the reason it was being held.
Posted by Dave Splash