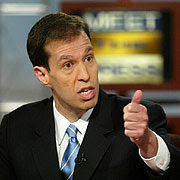 It has long been rumored, but now it has been confirmed. Former RNC Chairman and head of George W. Bush's 2004 re-election, Ken Mehlman is gay. The "architect" of the most anti-gay national election campaign of all time is, in fact, gay himself. Will wonders never cease!?

"Mehlman's leadership positions in the GOP came at a time when the party was stepping up its anti-gay activities -- such as the distribution in West Virginia in 2006 of literature linking homosexuality to atheism, or the less-than-subtle, coded language in the party's platform ("Attempts to redefine marriage in a single state or city could have serious consequences throughout the country..."). Mehlman said at the time that he could not, as an individual Republican, go against the party consensus. He was aware that Karl Rove, President Bush's chief strategic adviser, had been working with Republicans to make sure that anti-gay initiatives and referenda would appear on November ballots in 2004 and 2006 to help Republicans.

Mehlman acknowledges that if he had publicly declared his sexuality sooner, he might have played a role in keeping the party from pushing an anti-gay agenda."

I'm glad that Mr. Mehlman is now able to be, publicly, what he is in private, and I hope he is happy. But, I highly doubt that the gay community (though it is hardly monolithic) will be quick to embrace him until he atones for all he has done.

How many more prominent gay conservatives have to come out before the right will abandon its anti-gay agenda and embrace the civil rights issue of our time.

Here is a clip from a 2006 appearance of Bill Maher on the Larry King show where he "outs" Mehlman. Like I said, this was hardly new information.
Posted by Dave Splash