I had a fantastic time at yesterday's MAHA Music Festival on the Missouri River in downtown Omaha. I got there a little late, and missed It's True and Old 97s, but was able to catch a decent set by Ben Kweller before the band I came to see came on...Superchunk.

This was the first time Superchunk has played Omaha in its 21 year career (an accidental oversight, I'm sure), and they made up for the lack of shows with a powerful set that spanned their entire career. I saw the band a number of times in the 90s, but it has been 14-15 years since I last saw them (if memory serves it was at Marquette University in Milwaukee). I wondered how they would hold up all these years later. Fortunately, they held up amazingly well. 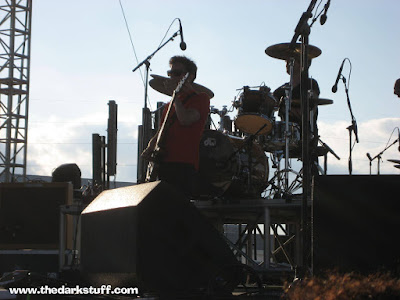 When Superchunk hit the stage, the sun was glaring right behind them, so if you didn't have some shades, you were fucked. Fortunately, my camera was able to compensate. 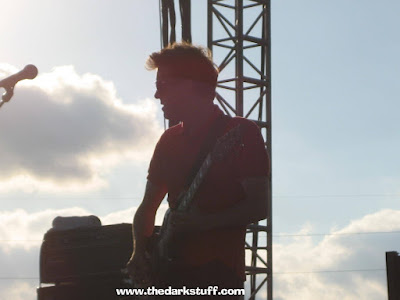 Guitarist/singer Mac McCaughan had his shades. 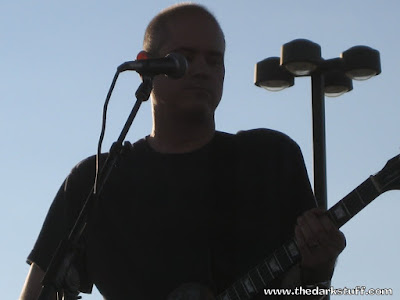 Jim Wilbur, on the other hand, rocked out shade-less. A bold move. 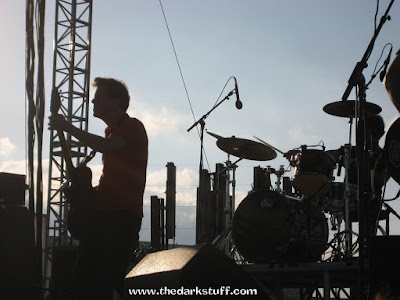 The set included Superchunk classics like "The First Part," "Skip Steps 1 & 3," "Like a Fool," and "Slack Motherfucker," but also included rare singles like "Cool" and "Baxter." The 'Chunk also performed its newest single, "Digging For Something." 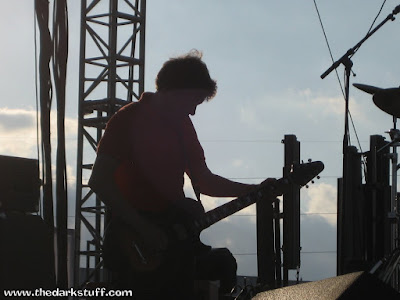 After a while, the sun might have started getting to Mac, as he lost his place in the setlist a couple of times. 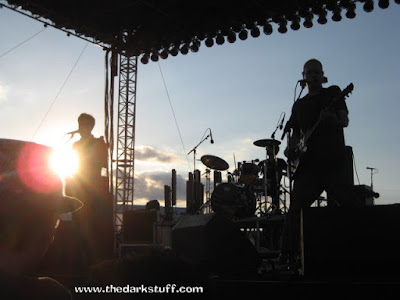 The sun was going down, but the energy level remained. 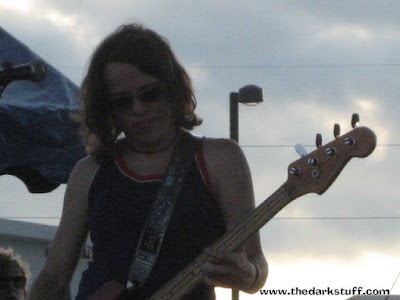 Bassist Laura Ballance spent the entire set on the opposite side of the stage from where I staked out my spot. Unfortunate. Yet, with the power of a cheap camera lens, I was still able to snap this pic. 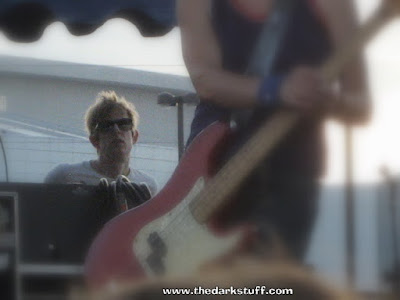 Look very closely at who is rocking out on the side of the stage...Britt Daniels of Spoon! 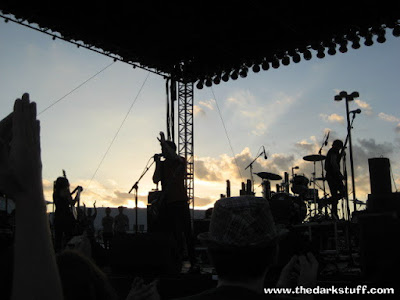 As the sun finally went down, Superchunk ended its set. Amazing show.
I was pretty spent after the set, so I decided to check out the view of the show from next door at Rick's Boatyard (a seafood restaurant). I spent the rest of the night there and caught The Faint and Spoon from the restaurant's balcony. It was hard to beat good food, a waitress, and an actual restroom (only the portable type on show grounds) when compared to the craziness of a Faint crowd. Music festivals are for the young, and I'm not as young as I used to be. At least, I'm honest about it. No shame in my game.
Posted by Dave Splash

Thanks for the review and pictures! I still need to put up all the Sasquatch stuff at my blog, but will do so during the next few days. I like Superchunk, would love to see them play sometime. Lucky you!!