Concert For Equality is Tomorrow! 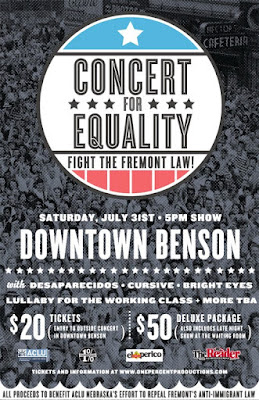 Just because the city of Fremont has put a hold on its new law does not mean the issue is over here in Nebraska. After all, Fremont could choose to re-instate it next week and force the other side to push for an injunction.

Politics aside, the show should be pretty amazing. The reunions of Desaparecidos and Lullaby For the Working Class are reason enough to go. I'll be hitting both shows (the indoor and outdoor) and keeping my eyes peeled for any surprise artists who just happen to show up to support the cause.

Conor Oberst was interviewed by KETV Channel 7 the other night along with a lawyer from the ACLU, and he explained why he felt he had to do something to combat the law in the nearby city of Fremont. Oberst considers it his patriotic duty. "To me, that's what's so un-American about it," he said. "To me, the idea of being an immigrant, that's as American a thing as you can be."

Supporters of the law are planning to protest the concert. One potential protester became unhinged during an interview with Channel 7 and attacked Oberst personally. "The comments that he makes are so anti-American and anti-white, he is actually the racist," said Susan Smith of the Nebraskans Advisory Group.

Should be an exciting evening. I will try and take pictures.

If you don't have a ticket already, you are SOL. It's sold out. So, enjoy this unofficial Desaparecidos video for "Greater Omaha."
Posted by Dave Splash