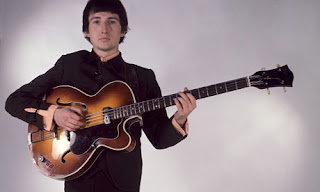 Pete Quaife, who has died of kidney failure, aged 66, was the bass guitarist of the Kinks during the group's glory years of the 1960s. He made a vital contribution to the dynamics of the group and was once named by the Who's John Entwistle as one of his favourite bassists because he "drove the Kinks along".

Read the rest of the obituary here.
Posted by Dave Splash