My Weekend In a Nutshell

Damn, is it Monday already? I guess so. The weekend flew by, which I guess means that it was a good one. It was, I suppose.

On Friday night I hit the Old Market (which I rarely do because it gets too packed) and met some friends at La Buvette. One of my good friends was in town for the weekend to celebrate her 40th birthday. In addition, she also announced her new engagement. I knew this was coming, eventually, but with a tie-in to a 40th birthday, it made the evening extra celebratory. This might explain the unusually high amount of wine I drank that night (a rarity, as friends know that I don't drink very often). La Buvette was getting too hot, so we moved around the corner to the French Cafe. After polishing off a few more glasses, I retired for the evening.

Though I felt great the night before, I was feeling the effect of the wine a bit more on Saturday morning. I wouldn't exactly say I was hung over, but I was definitely not my normal, cheery self :). I grabbed lunch with my brother, and then hit Homer's to buy some CDs (yes, people still buy CDs). I snagged the new Black Keys, as well as some music from Mark Eitzel, Ozzy Osbourne, and the new collaboration between The Flaming Lips and Stardeath and White Dwarfs (they remade the entire Dark Side of the Moon album).

There were no shows I felt compelled to see on Saturday night, so I opted for a night in, instead. It's funny, but with 400 channels of cable and about 200 DVDs in my collection, I still could not find anything to watch. All of my favorite shows are either on hiatus or have ended. On the recommendation of a friend, I decided to try a short-lived sci-fi series called Firefly. 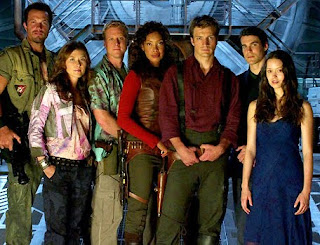 Firefly only lasted one season on Fox in 2002, but apparently has become something of a cult hit since its ending. The entire season is available for "on demand" viewing on Netflix, so I gave it a try. It's a bizarre show that is a mix of two disparate genres. It's both a western and a sci-fi show. It's set in the future, and space ships and lasers are present, but the characters dress and talk like the old west, and on some planets people live like they did in frontier days. It took a little getting used to.

The cast is a mixed bag. On the positive side, there is the stunning Morena Baccarin. You may know her as Anna on the new version of V. On this show, she plays a prostitute that travels with the crew of the ship Serenity. However, in this futuristic, old west world in which they live, prostitutes (known as "companions") hold a high place in the social order. Weird, huh? Summer Glau, best known for her roles in Terminator: The Sarah Conner Chronicles and Dollhouse (plus a favorite show of mine called The 4400), is also featured. Unfortunately, she does little more than scream and cry in this role. Alan Tudyk plays the ship's pilot, but I will always see him as the pirate from the movie Dodgeball. Ron Glass, best known for his famous role on Barney Miller in the 70s, plays a preacher traveling on the ship.

The main character, the captain, is played by Nathan Fillion. I'd seen the guy in a few other roles, but I couldn't remember where I really knew the guy from. Turns out, he was on a soap opera I watched when I was younger (I know, I know, it's lame but sometimes those things can hook you in). Anyway, once I realized this, I had a hard time seeing him as anyone but that soap opera character. It was weird, also, that he referred to people as "son" when he looked to be about 30 years old. The other kind of questionable casting choice is Adam Baldwin (not one of the Baldwin brothers, by the way). Baldwin plays the role of the dumb muscle, and the people who cast the show Chuck must have loved his performance here as they wrote his current role on that show to be the exact same guy.

Essentially, the show is about a crew of criminals who travel the outskirts of the galaxy doing jobs and trying to stay ahead of the law. Pretty much the same theme as the average western movie. But here it is 500 years in the future, and people are now on hundreds of other planets besides Earth. The governing body of these many planets is some strange combination of the old Earth's American and Chinese governments. Most characters on the show speak both languages. The crew of Serenity don't get along well with the government and try to steer clear of it. To make extra money, the ship picks up passengers on various planets, often in the seediest places. It reminded me a little bit of the first Star Wars movie where Luke and OB1 went into that dive bar looking for a pilot to take them somewhere and to avoid the Imperial government. To that extent, the Serenity is like the Millennium Falcon.

I have watched a few episodes, so far, and think it's okay. I imagine I'll watch the rest of the series since it was only one season. Firefly is definitely quirky (an adjective I'm not always fond of) and unique, but I can see why it had trouble finding an audience in America. It is filmed an paced more like a UK show that one would see on PBS. I'm not sure what I even mean by that...

I spent Sunday working on my radio show, New Day Rising. I had what I consider to be a great show last night. The playlist can be found here. It was a politics-free weekend, as well. I did not watch the news at all. This is a trend that may be continuing for a while.
Posted by Dave Splash

Dave, while I liked the series Firefly overall, I have to say the movie they made was better and tied the story together well.

It is called "Serenity" and it develops the Doctor and Summer's characters much better. I'd recommend that one for sure.
But then, I always was partial to westerns anyways...

My friend said the same thing about the movie. In fact, I think I tried watching it once a few years ago, but couldn't get into it. Maybe now that I have seen the show it will make more sense.