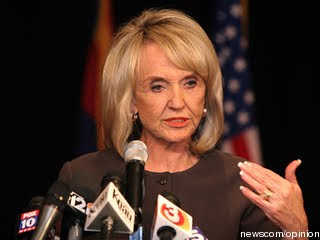 Arizona governor Jan Brewer has been in a lot of hot water over her state's recent racist, anti-immigrant law. The highly intrusive, big government law appears very popular with conservatives, despite the irony. But the good governor is now catching hell for her claim that her father "died fighting the Nazis in Germany." Why? Because it never happened.

When interviewed about the controversy surrounding Arizona's new law (and the banning of ethnic studies courses, and the firing of teachers with an accent), Brewer stated how much it hurt her to be compared to Nazis (which I don't endorse, that is the way the right operates), and said, "Knowing that my father died fighting the Nazi regime in Germany, that I lose him when I was 11 because of that...and then to have them call me Hitler's daughter. It hurts. It's ugliness beyond anything I've ever experienced."

But Governor Brewer's father died of lung disease in California in 1955. Unless I read one of those funny Texas text books when I was growing up, I seem to remember the war ending in 1945 in Germany. How could someone die, 10 years later, in America, fighting the Nazis?

Brewer was foolish for making such a claim regarding her father, particularly when it was demonstrably false.

That being said, I cannot believe you are STILL harping on the Arizona law as being "racist".

The law enforces the existing federal law, Splash, and there was nothing racist about it.

I know that's the right's talking point, but it doesn't make it any more true the 100th time it's repeated.

The AZ law allows anyone to be detained on "reasonable suspicion" of being illegal. No white person will ever be targeted by this. It is designed to harass brown people. Why you think American citizens who are Hispanic don't deserve the same rights as anyone else is beyond me.

American citizens regardless of their Hispanic heritage absolutely deserve the same rights as Americans because they ARE Americans.

It is the Hispanics that are here illegally that are not deserving of the same rights regardless of how loud they and the Democrats scream.

THAT is the point, sir.

Total red herring. No one is trying to defend the "rights" of illegals. Not me, and not the Democratic Party. But to deny that Hispanics who are citizens will be adversely affected and even harassed by this law is extremely naive. People with brown skin should not have an extra burden to prove their citizenship, yet under this law, they will. What happened to equal protection under the law?

To claim that the opposition to the law is based on defending rights of illegals is bogus. Illegals are here illegally. They don't have rights. Conservatives don't want to deal with the reality of how this law will discriminate against citizens. That is the point, sir.