I Saw This Coming 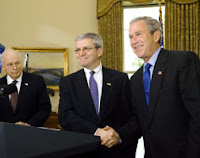 Former Chief of Staff to (thankfully) former President George W Bush, Josh Bolten, has been hired by BP in an effort for the company to "look after its interests" in the wake of BP's ongoing environmental disaster in the Gulf of Mexico. This is the second high profile Bush Administration official hired by BP in the last week. BP hired top Cheney aide Anne Womack-Kolton to be its spokesperson.

I guess I understand the "strategery." Who is better at manipulating American public opinion than a Bushie? After all, they did a masterful job conning most Americans into supporting the Iraq War by consistently repeating lies and falsehoods. BP is following that pattern by continuously denying there is an environmental disaster in the Gulf, by denying there are plumes of oil under water, by claiming they will make residents of the Gulf "whole again" yet only being willing to pay out the measly sum of $5000, and to use lobbyists and backdoor channels to ensure no new oil regulations are implemented.

Bolten, you may remember, is a former Goldman Sachs executive. While Chief of Staff to Bush, he was cited for contempt by the House Judiciary Committee for refusing to cooperate with the investigation into the illegal firings of nine US Attorneys. This is the kind of person BP hires?!

Do not believe a single word coming out of the mouth of any BP executive. They will fight having to pay for any of the clean up in the Gulf, will dispute the vast majority of legitimate claims and keep small business owners tied up in court for years or decades, and will continue to bribe members of Congress to keep them from drafting tougher regulations and increasing the liability caps for oil companies. These guys do not have the best interests of America in mind.

UPDATE: That did not take long. House Minority Leader, John Boehner, said today that US taxpayers should pick up the costs for the clean up of the Gulf, "I think the people responsible in the oil spill--BP and the federal government--should take full responsibility for what's happening there...We are going to have to get the money from the government and from the companies and we will figure out a way to do that." Huh. How is the government "responsible" for the leak (it's not a spill, actually)? It was a private company with private equipment operating for their own, private interests. Why exactly should the taxpayers foot the bill for private industry's fuck up? Is this how the GOP will take back Congress? By forcing the tax payers to bail out on the wealthiest companies on planet earth? Whose side are you on, Boehner?
Posted by Dave Splash

The federal government can get money out to those affected, and then recoup EVERY dime from BP accordingly. The taxpayers should NOT be paying this bill.

Oh, and by the way, Bush had a right to fire those few attorneys as they served at HIS pleasure. Just like Clinton fired ALL of the attorneys when he first came into office. Let that tired line go, Dave.

There are still rules as to how it can and cannot be done. And if everything was so above board and legal, then why did Bolten and Karl Rove lie and say they were fired for poor performance reviews, when their actual reviews were stellar? Why did they try to destroy the careers (especially Mr. Iglesias from New Mexico) of the attorneys who spoke to the media? Regardless, when Democrats get subpoenas from Congress, they appear. I guess the rules aren't the same for Republicans.