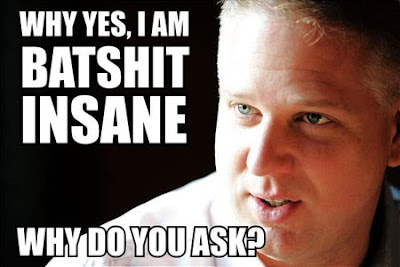 If you're a right-winger, a conservative, a teabagger, a Republican, or whatever it is you call yourself, you simply cannot take Glenn Beck seriously after this incident. Mr. Beck has been promoting a 1936 book entitled, The Red Network: A "Who's Who" and Handbook of Radicalism for Patriots, on his show recently. He said the book is from "from people who were doing what we're doing now. We now are documenting who all of these people are." The book was written by a woman named Elizabeth Dilling. Ms. Dilling was a notorious anti-semite from the 1930s and 40s who openly supported Hitler and the Nazis, and was a open racist.

Here are a few choice quotes from the 1936 book that Beck recommends, "God created separate races, but Communism insists upon racial inter-mixture and inter-marriage"

On Nazi Germany: "The problem of the large number of revolutionary Russian Jews in Germany doubtless contributed toward making Fascist Germany anti-Semitic." (aka, it's the Jews own fault they were victims of genocide). "Naziism has directed its attacks more against conspiring, revolutionary Communist Jews, than against nationalist German Jews who aided Germany during the war; if it has discriminated against the innocent also, it has been with no such ferocity and loss of life as the planned and imminent Communist revolution would have wreaked upon the German population, had it been successful as in Russia. Those making altruistic appeals for human rights for Jews in Germany, should at the same time raise their voices urging boycott of atheist Russia in behalf of its persecuted Christians and millions of "liquidated" starved Ukrainians, in order to escape the suspicion that they are protesting for Communist rather than "human" rights."

On the Fellowship of Faiths: "Speakers for the debasing and degrading Hindu, Mohammedan, Pagan, and Agnostic Cults are placed in "fellowship" and on an equal footing with speakers for Jesus Christ. The audiences chant a mixture of prayers and ritual from all of these. The savage Mohammedan call of the muezzin as heard in darkest Asia is mingled with the propaganda of the Hindu, Jew and agnostic. Negro choirs and performers give an interracial touch to the meetings. This jumbling of contradictory beliefs leads only to confusion and unbelief, and robs Jesus Christ of His rightful place as the Light of this World"

Ms. Dilling wrote a number of other anti-semitic books as well. In her book, The Plot Against Christianity, she writes, "Marxism, Socialism, or Communism in practice are nothing but state-capitalism and rule by a privileged minority, exercising despotic and total control over a majority having virtually no property or legal rights. As is discussed elsewhere herein, Talmudic Judaism is the progenitor of modem Communism and Marxist collectivism as it is now applied to a billion or more of the world's population."

In other instances, Dilling referred to Dwight Eisenhower as "Ike the kike," attacked Richard Nixon for his alleged "service to the synagogue," and smeared John F. Kennedy's New Frontier program as the "Jew frontier." She was also a regular attendee of pro-Nazi rallies in the US in the 1930s, and traveled to Germany to support Hitler many times. History professor Glen Jeansonne says Dilling was the "most bigoted woman anti-Semite of the period around World War II"

This is who Glenn Beck says is "doing what we're doing now." So, according to Glenn Beck, the tea party movement is pro-Nazi and racist. That's not me saying this, it's Glenn Beck. If you don't like the characterization, take it up with him. I'm through with this whackjob.

UPDATE: Beck refuses to apologize and pretends he didn't even know the name of the book he said he spent all last week reading. Here is his batshit crazy statement wherein he tries to blame "the left" for his promotion of a pro-Nazi, racist diatribe: "But I'm also getting some amazing mail from the left that now says I'm a Nazi anti-Semite because I quoted a book on Friday -- it was the Red Book, or something like that. It was a who's who, who's in the communist party in 1935. Apparently, I don't know, apparently written by a Nazi sympathizer here in America. Part of the, I'm sure -- I don't know because I didn't look it up -- but I'm sure part of the Father Coughlin, social justice crowd, because this is the choice that progressives give you -- you're either a Nazi or a communist. No, I'm neither. But now -- so now I'm kind of stuck between the place where the left says that I'm a Nazi sympathizer and a Jew lover. So I guess the left can have it all, that I'm a Jew-loving Nazi sympathizer. It's a really interesting place that I don't know if anybody's ever been."

Seriously, does anyone have any idea what the fuck he is talking about here? He says, "I don't know because I didn't look it up." Try Google, you nimrod.
Posted by Dave Splash

Thanks for posting this, Dave.

As of six weeks ago, Beck had lost 1/3 of his viewers since January, at least according to this article. Small wonder, considering how he just seems to get crazier and crazier.

This is good news. It gives me hope that while Americans can be made angry and afraid by these commentators, some of those who have been manipulated may still be able to find reason, and may yet have enough smarts to realize "Just because I share some basic views with this guy, it doesn't mean I have to agree that he is not crazy."