Does She Ever STOP LYING?! 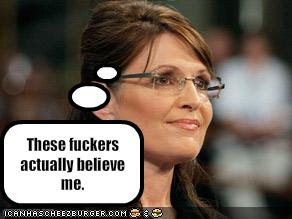 The woman who served about 18 months of her four year term as governor of Alaska before quitting because the job was too difficult for a lightweight, and whose signature slogan, "drill baby drill" has become the de facto energy policy of the Republican party, is now trying to say "I told you so" about oil drilling. Sarah Palin, failed governor, VP candidate, and Fox News hostess, posted the following message on her twitter (which is basically her only job now): "Extreme Greenies: see now why we push"drill,baby,drill"of known reserves&promising finds in safe onshore places like ANWR? Now do you get it?"

Get what exactly, Ms. Palin? Over the last year, you have said that there is no need for further study on environmental impact of oil drilling - both on and off shore - and have argued (erroneously, of course) that drilling off the US coastline would eliminate our need for foreign oil all together. In fact, just two months ago, Palin attacked the administration for not drilling off shore enough: "Let's not forget that while Interior Department bureaucrats continue to hold up actual offshore drilling from taking place, Russia is moving full steam ahead on Arctic drilling, and China, Russia, and Venezuela are buying leases off the coast of Cuba."

Like a typical conservative, Ms. Palin is trying to have it both ways, and the media she loathes so much refuses to point this out to her and the American people. Can we just dispense with the notion that this woman knows anything about...anything. Sarah Palin: for offshore drilling before she was against it.
Posted by Dave Splash

I'll tell you one way the enviro-whackos have made the oil drilling process more dangerous... by lobbying to ensure that no new drilling is conducted near shore in shallow waters on the continental shelf, they have made oil companies now have to drill in riskier deeper waters where the oil is harder to reach and more difficult to safely extract, as the BP incident has shown. They actually helped to percipitate this disaster peripherally by their foolishness.

Environmentalists do not want any drilling. Period. Why you guys on the right, with your idiotic mantra of "drill baby drill," want to make this the fault of the environmental movement is beyond ridiculous.

Take responsibility for the consequences of your own bad policy, and don't blame the green movement.

If the environmentalists had their way, we would have moved away from oil decades ago. There wouldn't have been any spill at all, if that had occurred. The foolishness is on the other side, amigo.

The problem with the enviro-whackos is that they are foolishly altruistic in that they want all oil production and usage stopped immediately. (presumably not for THEIR own use, however.) They do not realize that there currently are not other viable energy alternatives to replace oil.

Viability is relative in this case. There has been little to no investment in anything other than oil and its continued extraction - no matter how risky it becomes. Nothing from private industry and nothing from the government. There are plenty of possibilities, but there is such a stranglehold on this country by big oil.

They get billions in tax breaks, and we even fought a war for big oil's continued access to Middle East oil. Where are the incentives for alternate energy? President Obama wanted them, promised them in his campaign, but it is the oil soaked Congress that refuses to move. Both parties are guilty in this case.

To claim we can't do anything other than destroy our wildlife habitats, destroy our waterways, and engage in highly risky and dangerous methods of oil extraction, because nothing appears "viable" is simply not good enough. This is about America's future. We simply cannot extract enough oil for our own use, and we have to get it from the Middle East. So, we make our enemies richer and richer because private industry refuses to acknowledge the finite nature of fossil fuels, and we hear it's "socialism" for the government to do anything.

Kind of sounds like a continuing of the status quo, which all sides supposedly agree is not working. We, as a country, need to start doing what's best for us and not what's best for Exxon or BP or Saudi Arabia. Screw them. This is a national security and national survival issue.