Battle of the Musical Nitwits

It is certainly debatable as to who is currently the worst artist in music. But, to me, if Lady Gaga or Katy Perry are not on that list, then you have no taste. 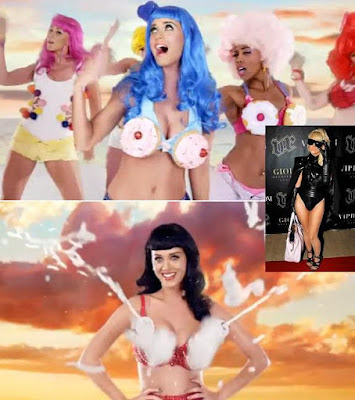 Both Katy and Gaga are ridiculously untalented, and both create generic, safe, horrible, mainstream pop music. At least with Katy Perry, she is good looking. The two are in a bit of a spat now since Katy Perry attacked Lady Gaga's new video for...get this...blasphemy.

Katy took to the internets to tweet her displeasure with her #1 competitor's new video, "Using blasphemy for entertainment is as cheap as a comedian telling a fart joke."

What is this 1955?! Attacking a pop star for blasphemy? And this from someone wearing a bra that shoots frosting in the air in her newest video.
Posted by Dave Splash