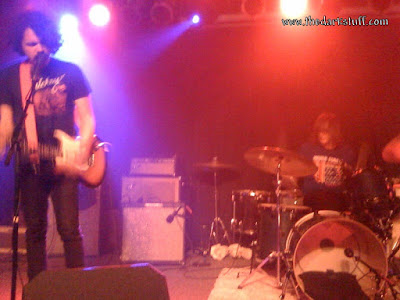 Had a pretty decent time at last night's Digital Leather/Harlem show at Waiting Room. The show was running a bit late as I heard Digital Leather's drummer was still at work. Huh? Couldn't get the night off? Regardless, he showed up about 10:15 and, within a minute or two, the band was playing. This time around the band was a trio. Just a few weeks ago when I saw them they were a five piece. In all honesty, they were better as a trio. No offense to those other two dudes, but they are totally unnecessary. In this version of the band, the songs more closely resembled the arrangements and sound of the recordings. For a band that places synth so far out in front on record, it's weird to barely hear it live. But with the trio, there is more of a balance. I liked it. Note to Digital Leather...stick with the stripped down live band. 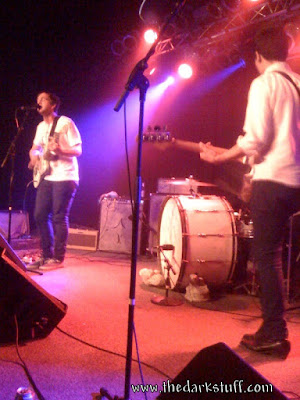 Next up was Harlem. These guys have a loose, garage-y, fun, poppy sound on their excellent CD, Hippies; and live it was pretty much the same. The guys were all smiles when they walked on stage, and that was probably because they were super baked. They announced from the stage that they were really high. Not too many bands go that route, but I guess honesty is sometimes the best policy. Most of Harlem's songs were pretty similar, but I liked the enthusiasm and the obvious good time the guys were having. Midway through their set, the guitarist/vocalist and the drummer traded places. It was a pretty seamless transition as the band sounded no different after the change.

Check these guys out if you get a chance, but keep an eye on your stash...
Posted by Dave Splash