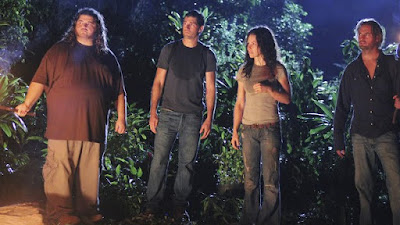 Incredible episode of Lost last night! Just one more to go until it's all over. This post will be brief. After last week's ridiculous explanation of the origins of Jacob and MIB, I was very glad to get back to present times in "What They Died For." As predicted, Jack will be the new Jacob. After the sub explosion, the remaining survivors (Jack, Kate, Sawyer and Hurley) decide that Locke must be killed. They are all in agreement, which is rare considering this bunch.

On their way to find Desmond, they encounter Jacob who finally explains (sort of) why someone must protect the island and why he chose his candidates. He tells them that they can choose who will be the protector. When Kate says her name had been crossed off, Jacob tells her he did that because she was a mother now. Besides, he tells her, it's just chalk on a wall; so if she wants the job, she can have it. But Jack volunteers, and goes off with Jacob for his special training. After drinking some of his special water, Jacob tells Jack that he is now just like him.

Elsewhere on the island, Ben, Richard, and Miles hit the old Dharma barracks to grab the explosives. But while there, Widmore and Zoey arrive. So does Locke. In a feeble attempt to hide, Widmore and Zoey go to Ben's secret room. Miles runs to the jungle. Richard and Ben do not hide, and Locke kills Richard (possibly). In keeping with his duplicitous nature, Ben then tells Locke exactly where the rest are hiding. Locke then kills Zoey, and begins to interrogate Widmore. Surprisingly, Ben shoots Widmore in an attempt to keep him quiet. Locke is okay with it, since he says he already got the information he needs.

Locke and Ben then set out to find Desmond. When they can't find him, Locke reveals his plan to destroy the island.

In the flash sideways, Desmond is continuing to put the Oceanic 815 folks into contact with one another. He shows up at Locke's school again, yet this time he beats Ben until he suddenly "remembers" him from before. Desmond turns himself in to police, and gets put in a cell with Sayid, and right next to Kate. When they are all transported, Desmond helps them escape (along with Hurley and a return of Ana Lucia).

In other related stuff, Locke agrees to let Jack operate on him largely based on something Desmond told Ben after his beating: that Locke needed to "let go." A beaten Ben accepts a ride home and a dinner invitation from Alex and her mother, Danielle. There is also a hint of romance between the two, but that may never actually be explored.

So, just one more episode left. There is potentially a lot that will occur in that final show. It won't be some sad trip down memory lane. I, for one, can't wait to see how the flash sideways and life on the island merge, since Desmond appears to be the key.
Posted by Dave Splash