Identity Politics on the Right? Too Many Jews on the Court? 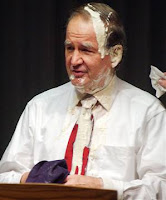 Conservative columnist Pat Buchanan made news with a column he wrote last week for World Net Daily (Are Liberals Anti-WASP?) criticizing President Obama for his choice of Elena Kagan to be a Justice on the Supreme Court.

It is hardly news that a conservative is critical of President Obama, nor is it unique for one to criticize the choice for the Court from a Democratic Administration. But Buchanan's critique is notable for what some (including me) deem to be anti-Semitism (a charge Buchanan has been contending with for decades -- maybe because of his frequent defense of Hitler, not sure). Buchanan does not mention anything about Ms. Kagan's qualifications, education, professional experience, or writings. Instead, Mr. Buchanan is upset that she is Jewish, and that if confirmed, she will be the third Jew on the Supreme Court (emphasis mine).

First of all, I didn't know we were keeping score. I didn't know there was a proper number of Jews for the Court and that Obama was exceeding it. Secondly, conservatives have always accused liberals of playing "identity politics" by issuing "quotas" for minorities who (they believe) are less qualified in both employment and political representation. This form of politics has been attacked by the right for going on 50 years. Why the change of heart, Pat? Are you now calling for exact proportional representation in government? I just want to be sure.

Michael Ford, a professor with Xavier University’s Institute for Politics and the American Dream, had the following humorous response to Buchanan today at Politico:

1. Catholics represent about 23% of the national religious composition BUT the composition of Catholics on the Court is now 66.6666% (Demon number that it is). Half of the Catholics ever appointed to the court are sitting there today.

2. Being black is not a religion as Pat implies. But the alleged anger concerning the failure of President Obama to appoint a black justice fails to note the amazing fact that the current ratio of Blacks on the court to black presidents is one to one.

3. There are about the same number of professed Islam followers in America as there are Jews. Does this mean that Mr. Buchanan is pulling for an appointment or two of Muslim justices while simultaneously reducing the number of Jews there?

4. There are more than 14% (nearly 50 million) of Americans who by choice are atheists, agnostics or otherwise non-religious citizens and who will dare speak up for them?

5. Let us not forget that there are an estimated3.5 million Druids and Wiccans. Do they get a seat on the court?

Frankly, this is pretty disappointing to me, as I have defended Buchanan in the past. During the Bush years, he was one of the more reasonable conservatives out there. But he has been dealing in bigotry and racial resentment for most of his political life, so I guess this latest turn should not be a surprise.

Someone should tell Mr. Buchanan that Puerto Rican is not actually a religion either. And I am waiting patiently for Pat Buchanan to call for a Wiccan to be appointed to the Court. Don't disappoint me, Pat.
Posted by Dave Splash

What the hell is wrong with the world, lately? Danged if I don't agree with you AGAIN, Dave! :)