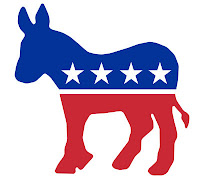 I would like to say I am pleasantly surprised, but honestly, it wasn't really much of a surprise. Last night's election returns should finally change the media narrative off of: the country hates President Obama and the Democrats and wants a return to the Bush years of right-wing control and Congress will be switching hands - dramatically - in November, for sure, just like 1994. That is pretty much all we have been hearing in the media for the last year or so. Obama had about a two week honeymoon before every single nutty Republican claim about socialism, death panels, birth certificates, and Hitler became the national discussion. It was all teabag all the time.

And though many of us on the left thought that too much was being made of the teabag crowd - considering they represent, on a good day, maybe 10-12% of the actual electorate - the media ate it up. What was so frustrating was that the media implied that all "anti-establishment" anger was from the right, and it was all directed at the President, Speaker Pelosi, or Harry Reid. Sorry, amigos, but it was an anti-establishment movement from the left that made Barack Obama the Democratic nominee in the first place (by bumping the party boss preferred Hillary Clinton), and the momentum it created carried him into office. He defeated the embodiment of the Washington establishment, John McCain.

Has the media not been paying attention while liberals were fighting against the more pro-establishment Democrats who were opposed to the Obama agenda? Look at all the primary challenges to members of Congress who voted against health care reform. Why was there a primary challenger to Sen. Blanche Lincoln in Arkansas? Why was there a challenger to Arlen "40 years as a Republican" Specter in Pennsylvania? Because rank and file Dems, liberals, progressives, whatever, are sick of the old guard in Congress, too. President Obama, to me, is not part of the problem. Harry Reid, however, definitely is.

What is even more frustrating is the media's inability or unwillingness to walk back any of its claims about the tea party's influence. Until yesterday (with Rand Paul in KY), there was not a single race in America that had been won by a teabag endorsed candidate - and that was just in a primary. Remember New York's 23rd? A Republican seat since the Civil War went Democrat because the voters overwhelmingly rejected the far right, teabag guy.

Last night was supposed to set the stage for the "inevitable" Republican takeover of Congress in the Fall. Yet, in the special election in Pennsylvania's 12th district (a set held by the late Jack Murtha for decades, and the only PA district that went for Kerry in 04 and McCain in 08), the Democrat won. The RNC poured tons of money into the race, and really hyped up a loss for the Dems, but it didn't happen. This was not an urban or "elite" district, either. Pennsylvania's 12th is about as blue collar as you can get. John Boehner better stop measuring the drapes for his Speaker's office. It ain't gonna happen this year.

So, all in all, it was a decent night. A victory in Pennsylvania in Congress. Arlen Specter losing a Democratic primary means the Republican candidate can't use his party switching to discredit him in the general. Sestack is a much stronger candidate. Rand Paul winning in Kentucky is a huge embarrassment to Republican minority leader, Mitch McConnell. He is already losing his grip on control of the Senate Republicans, and he clearly has lost all the control and influence he had in his home state. Hell, he pushed Sen. Bunning out of the way in order to put his guy (Greyson) in the seat, and then his guy loses - big time. Kentucky is a pretty right-wing state, but many experts say Rand Paul is too far right for the general election. Let's hope so. But even if he wins, he will be such a thorn in the side of Republican leadership, that it will be somewhat amusing. In Arkansas, Lincoln now has a run off, and Halter did much better than expected. Either way, it should show Blanche Lincoln that DINOs are on the endangered species list from this point forward.

Last night should rightly be seen as a bell weather for this November. But the conclusions drawn by the media about a mighty defeat for the Democrats seem a whole lot less likely now. I hope they restore some semblance of balance to the prognostication being doled out by the "experts" in the media. Both conservatives and liberals are bucking the establishment of their respective parties, but so far, the movement getting so much attention - the tea party - has not produced results worthy of all the hype.
Posted by Dave Splash

Let's put it this way... I don't want the current GOP to take back the country. I want conservatives to take back the country later this year. If they fail to do so, and the current crop of liberal fools in charge continue on their current path, we will cease to be the same America envisioned by our Founding Fathers within the course of this decade.

The "transformation" of the country will be decidedly bad.

Yep, there'll be no GOP takeover in 2010. It's not likely for 2012, either--neither the White House or either house of Congress--though it's still a tad early to make specific predictions about that.

In 2010, some Democrats will lose their Senate seats for sure--but there'll be Democratic pickups, too. I think the following seats could well flip:

Republican to Democratic
New Hampshire
North Carolina
Ohio
Kentucky
Missouri
Florida (Crist would caucus with the Democrats, if he wins--which is likely)

The other races will probably retain their incumbents or incumbent parties--unless something unexpected happens. Assuming no new scandals or tragedies (big assumption,) I see the Democrats netting a two or three seat gain in the Senate. The Democrats will probably see a net loss of a few seats in the House, but we won't see the massive losses you might otherwise expect, considering what natural advantages the Republicans should enjoy, if not for Tea Party interference.