I just found out that one of my favorite new shows has been canceled. The science fiction thriller Flash Forward just got the axe from ABC. This is a real shame, as it was a really intelligent and original show, and the story was just starting to really get good.

The show is based on a novel by a science fiction writer named Robert J. Sawyer (who I have not read, but plan to check out some of his books). In the pilot episode, the entire world experienced a black out simultaneously. This was not an electrical blackout, however. Every single person on earth lost consciousness for a little over two minutes. Suffice to say, many people died. But for the majority of people who lived, while unconscious, they experienced a vision of the future. A "flash forward."

Through investigation, the FBI figured out that everyone saw the exact same date, which was approximately six months in the future. Websites were set up so that people could relay what they saw, and perhaps meet people who were in the visions that they did not know. For those who had no vision at all, it was determined that they would already be dead by the flash forward date. 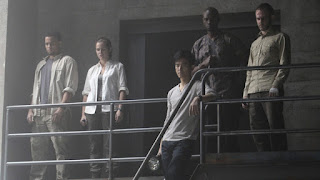 So, the FBI, CIA, MI6 and other intelligence agencies investigated to find not only what caused the blackout, but who caused it. There is a whole lot more to the story. This is just an overview.

Last night's episode was set on the day before the flash forward date as the FBI scrambled to prevent from happening some of the things that people saw in their visions. It was riveting. But apparently I am one of the only ones who think so since ABC canceled it. But...hello SyFy! How about grabbing this show before all of the cast members move on to other things!
Posted by Dave Splash