You Can't Say Something Is "Unconstitutional" When It's in the Constitution 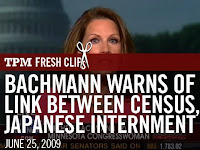 Over the last few months, the right has been doing what it does best: fear-monger. They told people that President Obama wanted to kill their grandparents, that he was going to confiscate your guns, that he would impose martial law, that he would impose Islam, and even that health care reform was designed to deny Republicans health care. All of this nonsense has been thoroughly discredited, yet many still pass it on as though it hadn't been (I'm talking to you Sarah Barracuda).

But one of dumbest instances of fear-mongering in the past year came in the form of paranoia about the US Census. Wingnut hero, Michelle Bachmann (R-MN), famously told her constituents (and the dummies who admire her) that she would not be filling out the census because she feared ACORN would somehow get a hold of the information. She further went on to deny that it is illegal not to fill it out. It is illegal. Same goes for the long-form census form (aka American Community Survey).

RedState.com editor and CNN contributor, Erick Erickson told his readers and followers that while the standard version of the census is required, filling out the longform is not. He then threatened to shoot any census worker who attempted to ask him to fill it out. From CNN, "I’m not filling out this form. I dare them to try and come throw me in jail. I dare them to. Pull out my wife’s shotgun and see how that little ACS twerp likes being scared at the door. They’re not going on my property. They can’t do that. They don’t have the legal right, and yet they’re trying."

Let's dispel some myths about the census (though facts don't seem to work on folks like Erickson and Bachmann). It is constitutional because it is in the Constitution. From Article 1, Section 2: "[An] Enumeration shall be made within three Years after the first Meeting of the Congress of the United States, and within every subsequent Term of ten Years, in such Manner as they shall by Law direct."

Okay, but what about the longform version - the American Community Survey (ACS)? Check Title 13 , United States Code, Sections 141, 193, and 221. And if you don't like that, the Constitution does say, "in such a manner as they [Congress] shall by Law direct."

The Congress is also allowed to levy a fine for non-compliance, and a stiffer fine for filing false information. But threatening census workers with violence? Most census workers are part-time, temporary workers. They are college students and retirees. They are just doing their job and trying to help their community. I was a census taker in 2000, and I'll tell you, it was a scary job. Remember, they only come to the house if you haven't filled out the form and mailed it in. The folks that refuse are either a) forgetful and apologetic or b) scary, anti-govt militia types. But, seriously, there is no need to threaten them with violence.

Look, if folks in the red states don't want to fill it out...go for it. There is only so much that can be done. Eventually, the government will move on and forget you. But when you lose representation in Congress because of it, don't whine about your "Constitutional rights" being taken away or that you are not adequately represented in Congress. You had your chance. I'm sure San Francisco could use another member of Congress...
Posted by Dave Splash

It would seem that a majority of people in this country aren't being represented anyway, Dave.

A significant majority of people specifically stated they didn't want the latest health care bill to become law, and yet it did.

Filling out or not filling out the census form is not the question. Voting out ALL incumbents is likely the only solution.

Nice dodge of the actual issue. I commend you, sir.

But just because you haven't accepted the results of the 2008 election, does not mean the majority of the country is not represented. What was the expression Karl Rove was so fond of? Oh, yeah...elections have consequences.

I find it amazing that you can ignore the clear will of the people in the only poll that matters - an election. This is kind of how democracy works.

If you're so confident that everyone is on your side, we'll just wait and see in November. But too often those on your side confuse losing an election with losing freedom.

As a nation, we have been experiencing this since Jan 2009. Frankly, speaking for those who voted for the winner in the greatest electoral victory in more than two decades, I am a little tired of the whining and complaining.