A Rare Moment of Candor from the RNC Chair 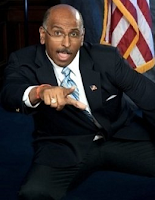 In a speech at DePaul University, RNC Chair Michael Steele was asked why African-Americans should vote Republican. “You really don’t have a reason to, to be honest — we haven’t done a very good job of really giving you one. True? True...For the last 40-plus years we had a ‘Southern Strategy’ that alienated many minority voters by focusing on the white male vote in the South. Well, guess what happened in 1992, folks, ‘Bubba’ went back home to the Democratic Party and voted for Bill Clinton.”

If a liberal or Democrat accurately points to the fact of the GOP's "Southern Strategy" he/she is accused of playing the race card. Just sayin'.
Posted by Dave Splash

For Blacks? How about what the GOP has done for Americans, regardless of their race.

Why the hell is the left so damned concerned with dividing people by identity politics?

The left? Are you effin' kidding me? Michael Steele is the chairman of the Republican Party! He's the guy who the GOP has pointed to for years and said, "See we are not all white!"

You guys created him, and now he's the left's doing?

Is there in anything, seriously, that you won't reflexively blame "the left" for?