Probably Not the Endorsement They Were Looking For 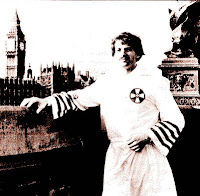 Former KKK leader and Louisiana state legislator, David Duke, recently spoke out in defense of the teabaggers. He was attempting to fend off the charges of racism being hurled at some members of the "movement." Not sure Duke is the best spokesman, since he has made similar arguments in defense of the KKK, as well. Birds of a feather...
"Tea Party people are called racist because the vast majority wants to stop the massive non-European immigration that will turn America into a crumbling tower of Babel. Most Tea Partiers believe that we in America have the right to preserve our heritage, language, and culture, just as every nation has that human right. The vast majority of Tea Party activists oppose affirmative action and diversity, which are nothing more than programs of racist discrimination against white people. The vast majority of Tea Party enthusiasts despise Hollywood and the mass media.

You know, the unelected media bosses have far more power than any senator or congressman, and are far more alien to America than the British were at the time of the American Revolution. At least the British were of our own, Christian cultural heritage, while the non-Christian ethno-religious minority who dominates Hollywood sees itself as very distinct from the 98 percent of the rest of us.

Tea Party activists are true populists who see the powers that control international finance and the Federal Reserve as the biggest threats to American prosperity and freedom.

O brother. I won't even bother with a response that you won't take seriously anyway.

I know, he's right... nothing he would say would make sense.