No One Is Coming For Your Guns You Weirdos 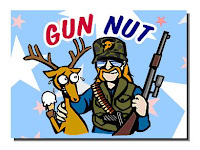 Yesterday was the 15th anniversary of the horrible terror attacks in Oklahoma City. For you Fox News viewers who have never heard of this (cuz that's pre-9/11 thinking), the attacks occurred on April 19, 1995. Right-wing terrorist Timothy McVeigh blew up a federal building in Oklahoma City and killed 168 innocent people and injured a great deal more. McVeigh was unrepentant until the day he was executed.

Also occurring yesterday, on the mall in Washington, DC and in Arlington, VA, was an armed protest designed to raise awareness of the 2nd Amendment and to whine about someone coming to take the protesters' guns away. Who is taking all these guns? No idea. But try telling that to these nuts!

Holding this armed protest against the "tyranny" of the federal government on the anniversary of the OKC bombing is incredibly distasteful and an insult to Americans of all political stripes. Using the same exact rhetoric as McVeigh did is more distasteful, and frankly, un-American.

Beyond all that, the accusations leveled against the Obama administration are 100% false. In his year and a half in office, President Obama has not put forth a single piece of legislation - of any sort whatsoever - to reduce access to guns. Not one. Nothing. Zip. Nada. Anyone who tells you otherwise is confused or a liar.

In fact, gun control advocacy group the Brady Campaign to Prevent Gun Violence gave President Obama an "F" on gun control. Obama even signed into law a bill that allows guns to be carried in national parks and aboard Amtrak trains.

So, when the NRA said Obama would be the most anti-gun president in US history, they were 100% wrong. Makes you wonder about all of the rest of the bogus, inflammatory, over-the-top claims about President Obama being made by the right wing in this country. I'd say, they are just as accurate as the NRA was.
Posted by Dave Splash

I don't know about specific legislation, but I do know it is very hard to find certain calibers of ammunition, and when you do find it the cost has gone WAY up.

I also have noticed in more than one gun store where the proprietors have a picture of Obama with the honorific of "Salesman of the Year".

Perhaps they seem the storm coming.

There is no legislation and there is no attempt to do anything to guns. This paranoia is just another example of the right's irrational fear of all things Obama.

And, as with all of the other delusions about the President, the right will keep on asserting it. Facts be damned!

Gee Dave the president should be "thanking" you and all your left wing friends for your continual defense of him.
I never saw so many left wing anti-government people all of a sudden now not only loves this government but defends it at every turn.
What's the matter you don't have enough confidence in the Anointed One to handle matters himself?
Do I smell racism here?
And they call Tea Parters irrational.

I never saw so many left wing anti-government people

What racism are you talking about? You make less sense than Glenn Beck himself.

I correctly pointed out how pro-gun extremists were marching to protest something that does not exist. President Obama has done nothing at all to restrict firearm sales.

So, the NRA lies about the president's record and you call me a racist? Put down the vodka.

Oh yes I forgot you do want big government. Do you want no matter who has the majority?
Why do you want big government anyway?
So if government is giving us everything we need what happens if it becomes corrupt like Venezuela or Cuba. Isn't that like giving up your sovereignty when you give too much power to one ruling body?
Your forget we are a republic with states rights. We are too big for a one size fits all. It can't possibly work. I'd hate to see us end up like the "empty shelves" of the Soviet Union.

Perhaps you need a refresher course in the US Constitution. Familiar with Article VI, Clause 2 (aka the supremacy clause). Allow me to educate:

Your side tested this concept by taking up arms against the US in the Civil War. You lost.

FYI, I don't want big government, I want smart and competent government. We are getting that now. But after an eight year nightmare like we had with the Bush regime, it takes time.

"smart and competent government" evidently means just like Bush's only on steroids.

See, the comparisons between Bush and Obama are ridiculous. You equate all spending equally, and say "Bush spent money, Obama spent it, therefore they are the same."

No, see, Bush left the country with massive deficits because he cut taxes for the rich and did it during wartime. He also created a new entitlement, but in doing so, made it illegal for the government to negotiate for the best price. Those wars, by the way, were not on the budget until Obama put them on it. And so much of the spending was on no-bid contracts, where Bush refused to be accountable to anyone but his wealthy donors.

Now, the Obama Administration is saddled with all of Bush's mistakes, crooked accounting, no-bid contract leftovers, in addition to having to save the economy after George "King Midas in Reverse" Bush left it in shambles.

Bush inherited a surplus, left with massive deficits, and yet only Obama is held to account. Interesting.

that's right he is responsible he's the president remember? He can spend whatever he wants and just blame Bush for it without having to be accountable.
Bush had a surplus thanks to 2 things -the 2 party government and he dot com boom which went bust when Bush took office so considering that, /9/11 and 2 wars I would have to say his spending doesn't come anywhere near Obama's.
Beside that my biggest complaint is too much government and how to pay for it in the future.
Although it wouldn't be the first time Soros broke the bank of a country. Obama is nothing more than Soros' lap dog.
You don't come from no experience and get to whre his without loads of money and loads of hush money.
It's no acident Obma came to DC with a huge war chest.

Your rant is so filled with made up bullshit that I won't dignify it with a response.

You actually give Glenn Beck a run for his money as the most factually challenged person in America.

Cry Bullshit as much as you want. It doesn't work anymore.
Eat up Dave. Some of us aren't eating up everything this admin spoon feeds us because we are leaving plenty for you.

No, but you do eat up everything told to you by Glenn Beck, Rush Limbaugh, and Fox News. Sorry, but I trust President Obama over a fat, drug addict who sits in front of a microphone all day eating chicken wings and spouting off racist, nonsensical jibberish to his idiotic, mouth-breathing followers. I'll let you decide whether or not I mean Beck or Rushbo.

As long as the NRA has as much money as it does, and wields as much power as it does in Congress, there is no way we will ever lose our rights to keep and bear arms. At least it will never happen through any law being passed... Rest easy, all you "They're gonna take away my guns!" people, because it simply isn't going to happen. In our country, it is MONEY that talks.