If You're Reading This, Chances Are Your Taxes Went DOWN in 2009

It's funny that the teabaggers get so worked up over taxes. It's funny because over the last 30 years, as the tax burden has shifted from the wealthy and corporations to the middle class, these so-called tax patriots said nothing. Not a peep. Under current tax law (put in place and left in place by Reagan, Bush 41, and Bush 43) international conglomerates like Exxon Mobil pay almost nothing in federal tax, while the average middle class person has seen their wages shrink and their tax burden increase.

In 1993, President Clinton introduced a budget that increased taxes on millionaires by a very slight margin. Every single Republican in Congress voted against it, and the GOP campaigned (and won) in 1994 by whining about taxes. The thing is, for nearly everyone in America, their taxes were not raised. But those to whom the Republican Party is beholden - the rich, the richer, and the richest - this had to be stopped. It wasn't, fortunately, and the US experienced unprecedented economic growth in the 90s, and that increased wealth was spread among a greater number of Americans than ever before. Trickle down is a failure, but trickle up? Worked brilliantly.

Naturally, the good times had to end, and when George W. Bush assumed the presidency in 2001, he set out to undo all of that prosperity, and re-rig the system to only benefit his extremely wealthy friends and donors. Wages went down, corporate profits went through the roof, and the gap between rich and poor increased to his highest level in US history. It worked like a charm, and once the Bushies got through dismantling the US regulatory system, we experienced the greatest economic collapse since 1929. Heckuva job, indeed. Bush was the new Hoover. 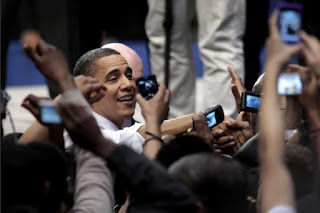 But now, April 15, 2010, we are once again at tax day. The rabid, factually challenged teabaggers are out in force (?), whining about their taxes. Except guess what baggers? Chances are, your taxes went down in 2009. If you made less than $250,000 last year (as 98% of Americans did) your taxes went DOWN. This is a fact that appears lost to the teabag crowd and to Fox News.

The conservative Cato Institute even acknowledged that under President Obama, taxes have not gone up. "The only tax I think that has been put in place so far is an increase in the federal cigarette tax. I can't think of another Obama tax that has gone in place so far," said Chris Edwards, Director of Tax Policy Studies at Cato.

According to the Center for Budget and Policy Priorities, a non-partisan organization, the average family of four is paying a mere 4.6% of their income in federal income taxes. This is the lowest amount in 50 years. Did you hear that America? Lowest in 50 years.

Thanks to President Obama and the Democrats in Congress (well, most of them), 98% of Americans had their taxes lowered in 2009. Lowered.

These are facts. Try and remember them when some Fox News watching, Limbaugh listening, Frank Luntz talking point regurgitating robot shouts at you about that socialist, Kenyan, Muslim in the White House, and how their taxes are so high. If that teabagger is not on the Fortune 500 list, then their taxes went down, too.

On a personal note, I earned more money in 2009 than I did in 2008 and I paid less in taxes. My business benefited immensely from the First Time Homebuyer's Tax Credit (a tax break designed not for millionaires, but for actual working people). Giving Bill Gates a tax cut would not have created this, and not helped me in any way. But a constructive use of tax credits to benefit average Americans helped immensely.

Don't let these fake grassroots teabag groups (funded by the same millionaires that benefited so much under the previous administration) get away with their lies and misinformation. In a way, I feel sorry for the teabaggers (not the racist ones, though, fuck them). They are being used and manipulated, and they don't seem to care. How sad.
Posted by Dave Splash

Why didn't you post my original response to this posting, Dave?

Actually, your original comment did appear. But, see, you commented on the posting above it called "The Girl Who Brought Down New York" I guess by accident. Your comment and a response was there.

And you proved nothing. The facts show that 95% of Americans received a cut in their federal income tax. If you want to be angry about that...well, that seems irrational, but have at it.

I apologize for even momentarily doubting you, Dave! :)

However, if you really believe that 95% of Americans got a tax cut, then you are indeed a true Obama believer. His statement is the ONLY source that was ever said with a straight face saying such a thing.

The truth is hugely in dispute with that assertion. We have racked up TRILLIONS in unfunded mandates and hidden taxes under this President in little over a year.

Obama pretends that if he doesn't call it a "tax" then the extra cost of living that he has created doesn't really count.

As for my accountant, my wife, who is extremely adept at business and taxes is the "culprit". Evidently since we did not partake of any of the Monty Hall style tax give-a-ways such as first time home buyer credits, college tuition credits, cash for clunker credits, etc. then we just came out slightly behind the previous year's taxes.

It is becoming damned close to the point where we have more people receiving net tax credits than we do of people actually paying taxes in this country.

What happens when we reach that tipping point of a majority of Americans realizing that they can vote for demagouging power hungry self-serving legislators that will keep giving them freebies from the public coffers and not have to "pay for it"?

Eventually the minority will not be able nor want to pay for it either. I submit to you that we have already reached that point.

If the tax burden is not reformed more equitably very soon, there won't be an America left, my friend.

It is becoming damned close to the point where we have more people receiving net tax credits than we do of people actually paying taxes in this country.

The right is so schizo on this issue. You constantly whine about being forced to pay too much in taxes, yet when tax credits are used to spur on economic activity (a tactic used by both parties), now people are paying too little?

If you want to be angry about unfair taxation, try the fact that companies like Exxon pay virtually nothing in US taxes, yet make billions in profits.

How about attacking a billion dollar company for utilizing loopholes to avoid paying any tax, and easing up on average Americans who bought their first home and received an $8000 tax credit. I would much prefer our tax code benefited people and not international corporations.

And one last thought on my social engineering point. Religion needs to lose its tax exempt status. If the Catholic Church, for example, has hundreds of millions of spare dollars to pay out in molestation settlements, it can afford to pay taxes. Same goes for political organizations that pretend to be based on religion (i.e. Focus on the Family).

Tax a few of those Mega-churches and we may see budget surpluses like the gold old days of President Clinton!