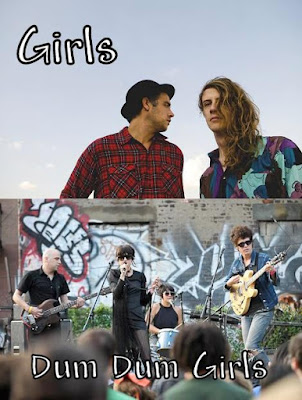 There is a potentially great show on tap for tonight at The Waiting Room. Two buzz indie bands - Girls and Dum Dum Girls - are both performing. Girls is a San Francisco duo whose debut, Album, made the 2009 best-of lists for many critics and bloggers. Dum Dum Girls is a new California band whose debut album for Sub Pop, I Will Be, was produced by legendary girl group producer, Richard Gottehrer (who has also worked with Blondie, Go-Gos and The Raveonettes).

I've been playing the hell out of both bands on my show, so I will definitely be hitting this one. See you there!
Posted by Dave Splash