Brief Burma Wrap Up with a Crummy Picture 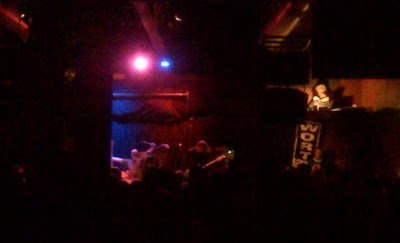 Had a great time on my Mission of Burma road trip to Madison last weekend. Truth be told, the "road trip" part was almost as fun as the concert itself. I used to drive all over the country to see bands play, but over the last five years or so, I haven't done it all. It was good to be back (in more ways than one).

Madison, Wisconsin is one of the greatest cities in America. I love it. I lived there for 10 years and had a business there. But I ultimately left there because the only real jobs in the city are in academia, government, insurance or banking. If you're in a different field, Madison can be a bit limiting. Anyway....

Seeing Mission of Burma is something I have wanted to do for almost 20 years. The band broke up in 1983, so I figured it was an impossibility. But since their reunion in 2002, they have done limited touring. I was finally able to see this legendary band. They were quite good, even though the set drew heavily from the more recent material. While I love the new stuff, too, I wanted a few more classics. Still, "That's When I Reach For My Revolver" was played, and that is the main one I wanted to hear!

The morning after the show, I threw on my new Burma hoodie and hit the hotel lobby to meet my friends. Clint Conley (bassist/vocalist) came up to me and complimented me on my choice of sweatshirt. That was cool.
Posted by Dave Splash