Very Brief Rundown of the It's True Show Last Night 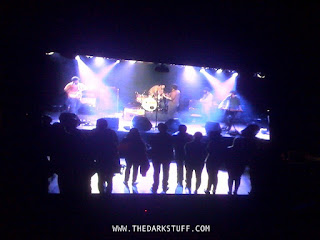 Hit Waiting Room last night for a brief meeting with the editor at Omaha.net, and to see It's True once again. The band was opening for a group called Steel Train from New Jersey. Before It's True played, I watched a little bit of the set from Holly Miranda. She was really good. Great voice, really intense. I went over to buy a CD, but no one from her band was there at the time to sell it to me. I meant to go back, but I forgot.

It's True's set was a bit wild, and sort of off. Still, an off set from these guys is still better than most bands at their level. Most of the folks there assumed the band was exhausted from traveling to Texas for last week's SXSW Music Fest. I'll just chalk it up to that as well.
Posted by Dave Splash

Email ThisBlogThis!Share to TwitterShare to FacebookShare to Pinterest
Labels: Concerts, Its True, Music