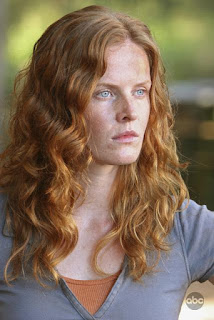 In an interview for E!, actress Rebecca Mader reveals that she is returning to LOST this season. Yay! Her character, Charlotte, was one of the scientists who came to the island on the freighter at the very end of season 3 (you know, to "rescue" everyone). She died on the show due to the repeated time traveling, but before she did, she revealed that she had been on the island as a child. It was speculated that she could return since the whole "time travel thing" made death not necessarily the end of a character. I guess we'll find out how she fits in tonight!

UPDATE: As rumored, Charlotte was back. She was part of the alternate LA reality (a "flash sideways"). She got super dolled up and ended up going on a date with Sawyer. After sexing it up, though, Charlotte got a little too snoopy (as in snooping around) and Sawyer threw her out. I'll have a full re-cap of the episode tomorrow.
Posted by Dave Splash