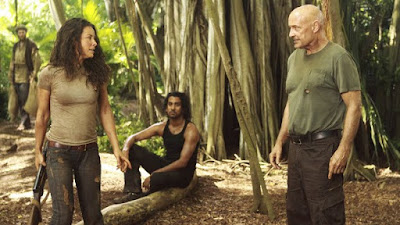 Another really excellent episode of LOST this week! Though the episode - "Recon" - focuses exclusively on Locke and his "team," it is Sawyer who winds up with the most screen time. The show opens with Sawyer off the island and in bed with some woman. It looks like it's the same old Sawyer, running a con on a beautiful woman, until we find out that in this version of reality, he is a cop. Not only is he a cop, but Miles is his partner, and they bust con men!

After taking down this criminal, Miles and Sawyer are talking and Miles presses Sawyer - using his real name of James Ford - about his vacation the week before. Sawyer told everyone he was going to Palm Springs, when in fact, he went to Australia. Miles then tells him that he is setting him up with a woman he knows...Charlotte. This is the same Charlotte - red head, English, gorgeous - that was on the island as part of the freighter team with Miles. The date goes well, and the two end up in bed. After their session, Charlotte asks if she can grab a t-shirt, and while looking for it, discovers Detective Ford's "Sawyer" file. This enrages Sawyer who yells at her and demands she leave.

I found this interesting for a number of reasons. For one, it shows that in both realities Sawyer is an orphan whose parents were conned, and in both realities, his father killed his mother. Likewise, Sawyer (or Ford or LeFleur or whatever) is hell bent on finding this con man and killing him. The con man's real name is Anthony Cooper in both instances, as well. On another site I read, the author wondered whether Charlotte was intentionally snooping for this file, or whether she came upon it by accident. I'm leaning toward the latter. I don't think that she was working for Charles Widmore in this version of reality. I could be wrong, but we'll see.

When Miles threatens to stop being Sawyer's partner, Sawyer finally comes clean about his trip to Australia and Anthony Cooper. Just as they are making up, a car crashes into them. Kate, still on the run from the US Marshalls, was driving.

Back on the island, Locke's team assembles at Claire's hut and Locke begins to explain what is happening next. When someone asks him what happened to those who remained in the Temple, he says the smoke monster killed them. He left out the part about him being the smoke monster, however. In a private conversation between himself and Sawyer, Locke reveals that he is, in fact, the smoke monster. He asks Sawyer to go on a recon mission to the other island. He tells him that the plan to get off the island is to use the Ajira plane that brought the castaways back to the island, but he wanted to know how many survivors were still alive.

Sawyer discovers that all of the remaining Ajira passengers are dead. He finds a woman named Zoe, who claims that she is the last living passenger. Sawyer senses that she is lying, but before he can act on it, Charles Widmore's armed guards capture him. When meeting with Widmore, Sawyer makes a deal with him to bring Locke to him in exchange for safe passage off the island for him and his friends. Back on the main island, Sawyer tells Locke about the deal he made with Widmore, and how they can now launch a surprise attack. Locke thanks him for his loyalty.

While Sawyer was gone, Claire attacked Kate and nearly killed her. Locke stopped the fight, slapped Claire across the face, and apologized for the incident. A frightened Kate ran off to the jungle to cry. Later on, Locke tells her a story about his upbringing (the man in black or the smoke monster, not Locke). He says his mother was "disturbed" and that because of this, he had a lot of problems growing up. He then tells Kate that Aaron now has a crazy mother, as well. Whether or not that means he is telling Kate to keep Aaron away from Claire is unclear.

Shortly after this, a tearful Claire apologizes to Kate and thanks her for taking care of Aaron in her absence. Did she really mean it? I think she did, actually, and it could be a sign that she is not as "claimed" as the folks at the Temple believed. When Sawyer returns from his mission, he tells Kate what he saw and then reveals that his plan is to let Locke and Widmore fight it out, and while they are distracted, he is stealing the sub and leaving.

So, we learned this week that neither Sawyer nor Kate are on "Locke's team." They see him as a means to an end - getting off the island. While Sayid is definitely "claimed" by Locke, Claire might not be. Perhaps her desire to be reunited with Aaron will overpower the hold Locke has over her. Besides, she now knows that Locke lied when he told her the Others took Aaron.

Next week's episode is supposed to reveal something I've wanted to know for many years...the story of Richard Alpert. I can't wait.
Posted by Dave Splash