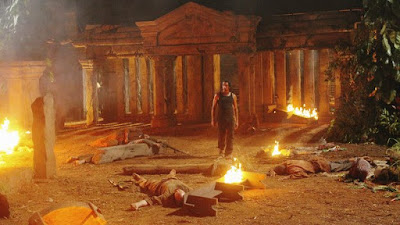 This week's episode of LOST, "Sundown," was perhaps the most violent episode in the history of the show. Without a doubt, the war over control of the island is on. Big time. Sayid and Claire played the most prominent roles in this episode, with Sayid taking an exceptionally violent turn both on and off the island.

First, off the island. After Sayid lands successfully in LA after his trip to Sydney, he shows up at a home and his long-time love interest, Nadia, answers the door. In this reality, however, Nadia is married to Sayid's brother, and they have two children. Things seem pleasant until the brother tells Sayid of his money problems. He borrowed money from a loan shark, and despite being paid back, the loan shark now wants to be paid in perpetuity. Sayid tells his brother there is nothing he can do as he has left that violent part of his life in the past.

When Sayid's brother is attacked (and is then taken to the same hospital where Jack works), he changes his mind. We learn that the loan shark is Martin Keamy (who in the original storyline was the mercenary who killed Ben's daughter on the island), and he wants Sayid to make good on the debt. Sayid then kills Keamy and his men. In a weird twist, Sayid then discovers a beaten Jin tied up in a freezer. This Jin does not speak English.

Back on the island, an angry Sayid confronts Dogen about why he was tortured. The two fight, and Dogen nearly kills Sayid. But he backed off at the last second, and instead, tells Sayid he must leave and never come back. Claire then walks into the Temple and tells Dogen that "he" (meaning the being occupying Locke's body) wants to see him. Dogen then un-banishes Sayid, gives him a special dagger, and tells him that he must kill Locke.

Sayid is obviously not able to kill Locke, despite trying. He then learns that this was little more than a set-up by Dogen: Sayid would try and kill Locke, he would fail, and then Locke would kill Sayid. But Locke does not kill Sayid, instead, he makes him a deal. He would get him Nadia if he went to the Temple and delivered a message. A similar deal was made with Claire for the return of Aaron.

The message was simple: Jacob is dead, there is no need to remain inside the Temple, and those who do will be killed. Many flee. Dogen and his deputy do not. Sayid kills them both. At sundown, as promised, the smoke monster (aka Locke) enters the Temple and kills (almost) everyone. In the aftermath of the slaughter, Sayid, Claire and Kate emerge. Locke looks pleased to see Claire and Sayid, but confused by Kate. Frankly, I was confused as well. What the hell side is she on here?

During the attack, Elana, Ben, Sun, and Lapidus arrived at the Temple to try and save some people. In a scary moment, Ben finds Sayid and tells him he can be rescued. "There is still time," he says. Sayid responds, "Not for me." Ben knows what this means, and he quickly exits. Elana found a hiding place for them inside the Temple that the monster does not know about.

It should be noted that prior to the attack, Kate told Claire about how she has been raising Aaron. In a previous episode, Claire said she would kill Kate if that were true. Wonder if this is still the case? Regardless, Locke and his new crew have been assembled, but there is no word on Sawyer, Jack, Hurley, or anyone else.

It seems to me that Jacob has chosen Jack to replace him, just as Locke has replaced the man in black. Yet, Locke had to die before he could be transformed. Will Jack have to die as well? And why can only Hurley see and talk to Jacob? Will Sawyer choose to go with Jack or Locke? Where does Kate fit in? Will Claire kill her? Also, before Dogen sent Sayid off to try and kill Locke, he told him that the monster will appear as someone he knows who has recently died. Does that mean everyone sees a different person, or does everyone see Locke? Has every apparition that folks on the island have seen over the years been that smoke monster? Or was it Jacob? What about Walt? He was supposedly "special" and Shannon saw him shortly before she died in Season Two. But he was allowed to leave the island. How does he fit into all of this?

The trailer for next week hints that Ben may be killed. The question of who kills him is still an open one. Elana, brought to the island to help Jacob, does not know that Ben was the one who stabbed him. Maybe she will kill him if she finds out. A large portion of the "Others" have now joined with Locke. They are Ben's former people. Maybe they will do it. I certainly don't see Hurley or Jack doing it. Who knows, maybe Ben dying will turn him into the new Jacob!?
Posted by Dave Splash