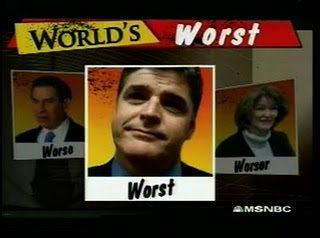 Conservative blogger Debbie Schlussel is reporting from credible sources that Fox News and talk radio star Sean Hannity's "Freedom Concerts" are little more than a scam. Hannity's charity, Freedom Alliance, has been promoting "benefit" concerts for years, and claiming the money is being raised for college tuition for kids of soldiers who died in combat, and for the families of those soldiers with severe injuries. Sounds like a great cause. Except hardly any of the millions raised by Hannity's charity actually goes toward it:

"The tax forms available to the public for the Freedom Alliance–for the years 2006-2008–paint a tragic story, a story of a charity that makes gazillions and spends very little for the purposes it claims, a charity that spends millions more on its small staff and crony consultants than it ever gives in scholarships to the children of the fallen or severely injured troops or in aid to the injured troops themselves."

He's not much better in any other years either. Sounds like Hannity is using his position to reward some crony friends with huge paydays, by exploiting the troops. Yet, why is no one willing to challenge him on this? Where is the big Fox News expose? Oh, right, he's a Republican, so the rules don't apply.
Posted by Dave Splash

Dave, as is typical of the left and their willing allies in the state run media, you got the story wrong. I should have guessed it with the Olberman JPG of Hannity on your post.

Just so you can be fair and balanced, here is the other side of the story:

If your allegations were true, Hannity and the Freedom Alliance would have long ago been front page news on all of the left-wing main stream media outlets. This is more like the un-substantiated libelous crap found on HuffPo and Daily Kooks.

Second, that link is just their version of events. Seems like an investigation is in order. I hope Eric Holder will consider it.

But for credibility's sake, they shouldn't have a convicted felon like Oliver North vouching for something as truthful.

I find it disgusting how my own side (conservatives) don't hold there "leaders" to account. You get the same old crap from the fox news crowd its just a liberal no its a real conservative who I read regularly and doesn't make millions of dollars preaching patriotism. The fox news crowd is pathetic they have the same tired guests on day after day and the same talking points. The truth is vannity did rip off these charities and the main stream conservative sites are doing all they can to defend him and call schlussel names. I really wish the main stream media would report on this fraud vannity now he's pushing a book that he got a million dollar advance and he's preaching how all the "proceeds" are going to the same charity thats been ripping off the troops. What a joke.