Is Petraeus Running For Pres? 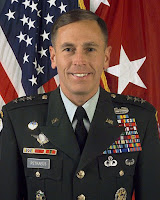 Well, Gen. David Petraeus is not saying if he'll run, but he is going to New Hampshire to speak soon. The assumption is that the general will run as a Republican, but will he get any support? Remember, he has come out unequivocally against the torture program initiated by the Bush Administration, and has pushed back hard against right-wing critics of President Obama's handling of the fight against Al Qeada. He has favored trying terror suspects in civilian courts, making deals with enemies like the Taliban, closing Guantanamo Bay prison, and believes the Geneva Conventions should always be honored.

This won't sit well with the pro-torture right that votes in GOP primaries. How long into a potential primary will it be before someone like Mitt Romney tries to paint him as "soft on terror" because he condemns waterboarding?
Posted by Dave Splash

I'd be curious where he stands on foreign policy and fiscal responsibility/domestic issues.

At least you're waiting to hear and not assuming - like many on the left and right - that his views match the ridiculous neo-con foreign policy we have been suffering under for the better part of the last decade.

Yeah, because the laissez fair foreign policy of Obama has been wonderful, particularly in preventing Iran's nuke program.

Maybe if he would go there and bow to Ahmadinejad too... :)

Really? That's Obama's fault? This has been a decade in the making, plus Iran's status has been greatly improved thanks to the neo-con wet dream war in Iraq. They were the biggest beneficiaries of that mistake. And Obama has gotten farther than any previous president on getting Russia and China to go along with sanctions on Iran. We are in a better position now than we were the entire 8 year Cheney administration.

It's so funny how you guys get so worked up about stupid things like bowing, but don't even care at all about the fact that your neocon heroes FAILED to get those responsible for 9/11, started a war with a country that didn't have WMDs (which countless inspectors said before the war), and had less success in killing Taliban and Al Qeda leaders in 7 years than Obama has had in one.

Oh, and magically, terrorism did not end when we put 150,000 troops in Iraq. But, yeah, that "bowing" and "apologizing" sure is worthy of outrage.

I didn't say that Iran was Obama's fault. I said his "hands off" approach has absolutely not worked. Frankly, it has made things much worse.

Bush should have taken care of this before leaving office, but I can only imagine the lies that the left would have heaped upon him for having done so. (kinda like "countless inspectors said before the war" i.e. that there weren't any WMD's.)

The U.N., the E.U. (including FRANCE), and nearly all of our allies knew there were WMD's in Iraq according to multiple intelligence agencies and sources throughout the world. The scary thing is that some of those hidden WMD's will come to the surface again someday, I almost guarantee you!

Further, I do applaud Obama for his recent prosecution of the war in Afghanistan. I only hope that he stops with the foolish rhetoric of "when he is going to start pulling troops out".

He has done well there and I give him credit, despite his taking his damned sweet time to send the requested troops there.

As far as Russia and China, Obama is NO futher along then when he took office, despite selling out our allies in Poland and the Czech Republic by abandonding theatre missile defense in order to appease a decidedly unfriendly Russia.

Yeah, that was a hell of a trade off. We got a few begrudgingly thankful words from Putin and Medevev by putting us and our allies more in harm's way.

What a statesman our President is!
I sure hope he doesn't unilaterally disarm the entire nation before he is out of office in 2012!

The scary thing is that some of those hidden WMD's will come to the surface again someday, I almost guarantee you!


If you believe that, then there's this bridge I'd like to sell you...