Eric Cantor: You Are a Clown 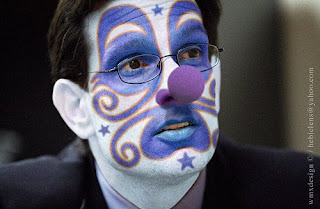 Over the last week or so, we have seen a disturbing number of threats of violence directed at Democratic members of Congress in response to the passage of the Affordable Care Act. Most of the threats were in the form of profanity laced voicemails; but a number of Democrats' offices had bricks thrown through them, some had faxes with pictures of nooses on them, and others (including civil rights icon John Lewis) were called nigger and faggot and spat on when entering the Capitol Building. Rep. Anthony Weiner (D-NY) had an envelope filled with a mysterious white powder sent to his office. In these cases, unhinged teabaggers were the culprits, and many right-wing blogs celebrated the attacks, or attempted to downplay them.

But it is not only teabaggers and right-wing bloggers who are responsible for the current political environment. The Republican party - especially its leadership - bares some, too. When the Minority Leader of the House of Representatives says that passage of the health care bill will lead to "Armageddon" and the "end of freedom as we know it" and rank-and-file Republican members of Congress frequently question the president's citizenship, compare him to Stalin, Hitler, and Mao, and openly embrace the more radical elements in the teabagger movement, they are responsible for what happens when people believe them. For her part, former half-term Alaska governor Sarah Palin posted a map on her Facebook page with the names and districts of Democrats who voted in favor of HCR (and whose district supported the McCain/Palin ticket in 2008) with rifle cross-hairs on top of them. She also talked about "re-loading" in the same posting.

But the GOP's #2 in the House, Eric Cantor (R-VA) takes the cake. Rather than make any attempt to calm his enraged base (enraged primarily based on lies he has been spreading on TV and talk radio for over a year), Mr. Cantor actually blamed the Democrats themselves for the acts of violence directed toward them. He said that by mentioning the violence in the media, that they were "fanning the flames" of said violence. He then tried the old, "but we're actually victims of the left" bullshit by claiming that his office was shot at.

Unfortunately for Mr. Cantor, his "the other side did it too" nonsense has been dis-proven by the Richmond, VA police. Here is a summary from the Associated Press of the alleged threat against Mr. Cantor:

"A bullet was shot through the window of my campaign office in Richmond this week, and I've received threatening e-mails," Cantor said. He refused to release details, however, saying it would only encourage more threats, and refused to take questions.

Later Thursday, however, Richmond police said in a news release that the bullet had been fired into the air around 1 a.m. Tuesday. It finished its random arc back to earth at a sharp downward trajectory, breaking a window pane on the bottom floor of the two-story brick building where Cantor's campaign leases the top floor."

Okay, so when will Rep. Cantor apologize for dismissing real acts of violence and intimidation directed at Democrats and admit that his story about attacks against him were, at best, exaggerated, at worst, complete bullshit? I won't be holding my breath. This is playing from the same deck the right has been using for the last decade. I don't expect him to suddenly come to his senses.

Is there a single decent person left on the conservative side? I really have to question whether there is.
Posted by Dave Splash

In a response to a posting on Politico that asked Do Democrats have legitimate gripes about GOP rhetoric they claim is "fanning the flames" of anger? University of Maryland law professor Sherrilyn Ifill had a terrific comment:

"Let’s dispense with the false Republican/Democrat symmetry that has become the only lens through which we view events in Washington. There is no symmetry here. The rhetoric of Republican leaders – replete with hunting metaphors, cross-hair icons, and other veiled references to violence – whether perpetrated by Sarah Palin, Michael Steele or Republicans in Congress – cannot be compared with Democratic leadership, even during the dark days of George W. Bush, when there was a real assault on the Constitution in the name of national security (as the Supreme Court later confirmed in several cases).

Code Pink and Cindy Sheehan did not walk around at rallies brandishing rifles, nor did anti-war and anti-Bush activists carry signs that suggested that a gun could solve the problems that politics cannot. Nor did they wear T-shirts quoting the language used as a call to action by Timothy McVeigh and other violent groups. I know of no instance in which members of Congress who supported the Patriot Act were spat upon by leftist visitors to the Capitol.

The history of right-wing violence in this country over the last 50 years cannot be denied. Yes, there’s been some violence on the left. But most Americans had never heard of the Weather Underground until the Bill Ayers flap during Obama’s campaign. But we all know the names James Earl Ray, Timothy McVeigh, Eric Rudolph. And we know many of the victims – from civil rights activists to doctors who provide abortions. There’s a reason for that -- and it’s not because of liberal media bias. There has been a long and disturbing history of right-wing violence in this country.

Both Republicans and Democrats know this history. Republicans and Democrats should stand together and denounce any explicit or implicit calls to violence. That some Republican leaders are irresponsibly ignoring this reality, and through their rhetoric fanning the flames of outrage among their most zealous and potentially dangerous supporters, is beyond shocking. And when we decide that this is simply another matter in which we seek to balance the scales between Republicans and Democrats, we ignore the growing threat to the stability of our country and the safety of our leaders. On this we should be united."

It is not often that I swear, but that comment is utter bullshit!

I will gladly respond with detailed examples later... when my blood pressure is lower.

I thought it was summed up quite well.