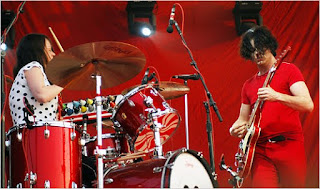 Rock band The White Stripes are (understandably) upset about what they claim is an illegal use of one their songs in a TV ad by the US Air Force. The ad was aired during the Super Bowl. According to the BBC, the band's song "Fell In Love With a Girl" was used without permission.

The White Stripes issued a statement on their website where they said they will "take strong action to stop the ad containing this music...We believe our song was re-recorded and used without permission of the White Stripes, our publishers, label or management...The White Stripes support this nation's military, at home and during times when our country needs and depends on them. We simply don't want to be a cog in the wheel of the current conflict, and hope for a safe and speedy return home for our troops."

I actually don't remember seeing the ad during the game. Must have been taking a whiz...
Posted by Dave Splash

I didn't see any of the adds because they don't show them on AFN where I watched the game. However, what the hell good would "Fell in love with a girl" be to Air Force recruiting anyway?

I don't have any idea. Someone at some ad agency must have thought it was a good idea. I bet that he/she may be losing their job over this. Acquiring a proper music license is kind of an advertising basic.