A True Man of the People 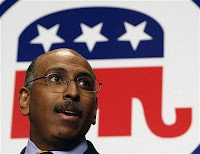 A new article in Politico reports that top donors to the RNC are upset at Chairman Michael Steele's extravagant spending habits. According to them, whether it's hiring world renowned chef Wolfgang Puck for the RNC Christmas party or having the party's annual conference in "exotic" Hawaii, Steele's spending is out of control.

Mr. Steele also appears unwilling to fly commercial. Expenditures for private planes have doubled under Steele, and meal expenses have gone from $306,000 to $599,000.

If all of this spending was offset by increased fundraising, it wouldn't be so bad. But it's not. "When Steele took over the chairmanship last winter, he inherited a $23 million surplus. Since then, the former Maryland lieutenant governor has raised $10 million less than the party collected in 2005 and has spent $10 million more. By the end of 2009, the committee’s surplus had shrunk to $8.4 million, according to campaign finance reports," according to Politco.

In the largest economic downturn in decades (largely caused by the Republican party), does it strike anyone as odd that the RNC would choose now to start spending like drunken sailors? What kind of message does it send to those looking for a job or tightening their belts? Seems like a pretty solid indicator of what the party would do if put back in charge of government.
Posted by Dave Splash

I agree with you and am disgusted with Steele's spending.

That being said, you are hilarious saying that this economic downturn is "largely caused by the Republican Party" when you have your man-boy president holding the reigns and galloping towards the cliff.

So, are you going to pretend that your guy George W didn't come into office with a budget surplus, and then proceed to put two wars on the country's credit card, create a new entitlement that forbade negotiating prices for drugs downward, passed massive tax cuts for millionaires without any spending cuts, and presided over the greatest economic collapse since the 1920s?

First, I never pretended that Bush was my "guy" to begin with here.

As for the rest of that stuff, yes Bush is guilty as charged with the exception of the "tax cutS for millionaires" class warfare nonsense you are spouting. I got a tax cut and I venture to say you did too. I am not a millionaire. Are you, Dave?

Bush started the rapid economic decline for sure. Why you think it is okay for Obama to continue it at full speed ahead is beyond me!

See, I'm not letting conservatives get away with saying they weren't Bushies. Until 2006, it was practically illegal to criticize the almighty W, and every conservative I know pulled out every stop to defend him, and to argue that he was going to usher in a "permanent Republican majority."

Now that everyone acknowledges what liberals like myself have said all along - that Bush was a horrible president - it seems almost everyone who voted for him now disowns the guy. I'm not buying it.