Slowly Getting Hooked on Mad Men 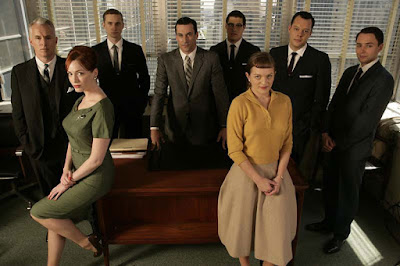 After resisting for a few years, I finally put Season One of Mad Men in my Netflix queue. The AMC series, for those that don't know, is set in an advertising agency in 1960 New York. The show is pretty much everything the critics say: well written, well acted, etc. For me, what grabbed me, at first, is just how different America was a mere 50 years ago.

First and foremost, is the way in which women are spoken to in the office. Having grown up following the feminist movement of the late 60s/early 70s, I don't find it at all strange having women in the office (in non-support roles) or having a female boss. In fact, I have a female boss now. It's such a non-issue in 2010. But in 1960, women could not be anything more than a secretary or personal assistant. The idea that they could do more is openly mocked by the gentlemen that run the Sterling & Cooper Advertising Agency in the show. The amount of blatant sexual harassment that goes on (a concept which had not yet been defined at the time) also seems foreign to me, but was quite common in that day and age.

One will also notice some other behaviors that are no longer socially acceptable throughout the show. The main one, of course, is smoking. Everybody is smoking. And no one takes a "smoke break." You can smoke at your desk, on the bus, in the elevator, in restaurants, at the doctor's office, wherever. They even showed a pregnant woman smoking. Clearly, we know a helluva lot more about cigarettes now than folks did back then. Drinking is pretty much the same thing. Most of the men on the show have a liquor cabinet in their office, and few wait till work is over to start drinking. It sure was a different era.

Obviously, in the area of race, it was quite different in 1960. This show is set in NYC, and not in the Deep South, so it is not as extreme. Still, the only black people you see are elevator operators, door men, waiters, and other service jobs. There are certainly no African-American account executives at Sterling Cooper. For that matter, there aren't any Jewish ones either. 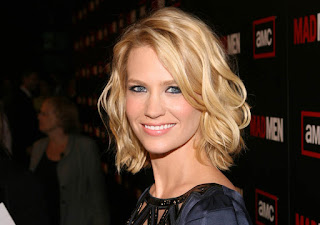 A lot has been made of some of the show's sexy female stars, most notably January Jones (above, as Betty Draper) and Christine Hendricks (as Joan Holloway). They do make great eye candy, to be sure, but they also show the only two options women had back then. Betty, a former model, is married to Senior Executive Don Draper (played by Jon Hamm), and is a full-time housewife and mother of two. Her days consist of cleaning the house, cooking dinner, and gossiping with the other housewives in the neighborhood. Joan, on the other hand, is in charge of the secretarial pool at the agency, and is the lust object of nearly every man working there. But her job is little more than a means to an end. She wants a husband - a rich one. Once she finds that husband, she will be leading the same life as Betty. At the point in the show where I am now, she is carrying on a secret affair with the very married, Roger Sterling (John Slattery).

There is also a very gay Art Director at the agency, but no one seems to realize he is gay (perhaps even he does not fully realize it). It sure was a different time. Better in some regards, I guess, but for those who are not white men, I think the country has improved drastically. But it sure would be fun to go back to that era for a little while.
Posted by Dave Splash