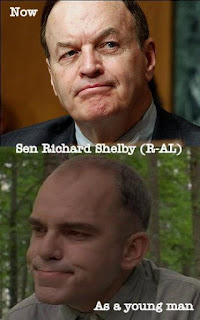 The National Journal is reporting that Republican Senator Richard Shelby of Alabama has taken the unprecedented step of placing a "blanket hold" on every single one of the president's nominations sent to the Senate. He is single-handedly blocking 70 nominations from going forward.

The reason? He wants pork for his state. He refuses to allow anyone to come for a vote until he gets the money for his pet projects in his state:

- A $40 billion contract to build air-to-air refueling tankers. From CongressDaily: "Northrop/EADS team would build the planes in Mobile, Ala., but has threatened to pull out of the competition unless the Air Force makes changes to a draft request for proposals." Federal Times offers more details on the tanker deal, and also confirms its connection to the hold.

- An improvised explosive device testing lab for the FBI. From CongressDaily: "[Shelby] is frustrated that the Obama administration won't build" the center, which Shelby earmarked $45 million for in 2008. The center is due to be based "at the Army's Redstone Arsenal."

So, the deficit hawks and anti-pork forces only seem to care about spending when it's not in their district. Shelby has no principles, no guts, and no brains. What an asshole. And in the interest of full disclosure, shouldn't the negotiations for this blood money be televised? When Shelby holds the entire country hostage so he can get bribed, don't you think we have a right to see this? Shouldn't the teabaggers be protesting outside of Shelby's office? Isn't this what people hate about Washington? When members of Congress put their own priorities ahead of those of the people?

Personally, I think President Obama should put everyone in through a recess appointment. The Republicans would be angry and whine like they usually do, but the American people, by and large, wouldn't really care.

A hysterical blogger who calls himself the Rude Pundit has some words on this situation. Here is a quote (you should read his entire post): "Yesterday, a barbershop quartet of assholes farted in harmony about earmarks. Republican Senators DeMint, McCain, Graham, and Lemieux held a press conference to address their concerns about the very subject, calling for an earmark moratorium and a balanced budget amendment. Said DeMint, '[I]f we have 535 congressmen and senators who still want their earmarks and are not willing to take even a one-year timeout, then we have a huge problem addressing our debt.'"
Posted by Dave Splash

Pretty much not cool, I knew the Republicans would fuck this opportunity to screw Obama up. It's not that I in general have an issue with blocking apointment, but if it's for pork screw that bastard.

We'll get a tea party candidate to replace him.

Yep, it might surprise you, Splash, but I agree with you on this one. Shelby should be targeted in the Republican primary in my opinion.

As for holding hostage Obama's appointments, well despite the fact that this is rather unseemly, I just have to ask, how does it feel to have it done back to you?

This was standard operating procedure done to Bush during his administration. The donkey-boy Dems wouldn't even give John Bolton a hearing for UN ambassador and Bush ended up having to post him through a recess appointment.

The Democrats can't do this and then not expect reciprocation from the idiot Republicans.

Nice we all agree on something. However, while plenty of Bush appointments were held up (some for legitimate reasons, some for political ones), no Dem ever put a blanket on 70 at one time. I think Shelby takes the cake on that one!

By the way, the "young and old" Shelby pictures were not very nice.

Splash! I think you just came up with the new Democratic Party slogan! :)

I think he just figured out my whole life operating stratagy.