Senator Jim Bunning (R-KY): You Are a Douchebag 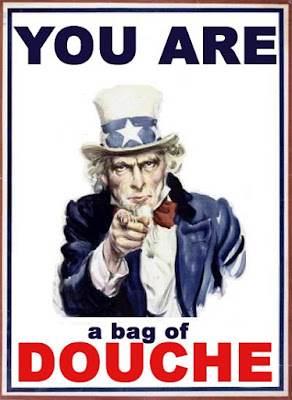 Last night, on the Senate floor, a remarkable thing happened. In a debate on extending the unemployment benefits for approximately 1.2 million Americans for 30 days, Republican Senator Jim Bunning of Kentucky told everyone who is unemployed, "Tough shit." That is literally what he said. "Tough shit" if you're unemployed. Bunning is single-handedly blocking the benefit extension.

After telling his colleagues that it was "tough shit" if struggling Americans didn't get the help they need, he then went on to complain about missing a basketball game that he really wanted to see. "I have missed the Kentucky-South Carolina game that started at 9:00," he said, "and it's the only redeeming chance we had to beat South Carolina since they're the only team that has beat Kentucky this year."

Hmmm....Bunning missing a basketball game vs. 1.2 million people losing benefits. Yeah, not sure what side to take on that one. Sen. Bunning, you are a douchebag.
Posted by Dave Splash

Bunning evidently is not very adept at social graces; however, he simply wanted to make sure that this spending bill was paid for before further adding to the deficit.

He is not against the bill; he simply wants it funded first. I know this is a novel concept for government, particularly for Democrats.

Why, then, TP, did he vote against the Pay-Go rule when it came up for a vote? This would have mandated that things be funded first. The Dems voted for it, and the Repubs voted against it. Seems like this novel concept is one that your side likes to conveniently forget on occasion.

If that is the case, how come the Democrats insist on spending money they don't have in violation of Pay-Go?

"Well the law isn't functional so we Democrats don't have to abide by the principle of it." Yeah, nice excuse. Bunning is at least trying to be responsible here and is being lambasted for it.

Yet it was the Republicans who abandoned it during the Bush years, and the Democrats - at the insistence of President Obama - who tried to re-instate it. Sorry, man, but in this case, it is the Republicans who are engaging in total hypocrisy. It's a "do as I say, not as I do" mentality that is so rampant in the GOP.

Bunning was not being responsible, he was being an ass. And since he and Mitch McConnell hate one another, this had more to do with their rivalry than any so-called principle.

The fact that Republicans did spend foolishly is the reason why conservatives stayed home and the GOP lost power accordingly.

I agree that they are to blame there.

The Democrats are the majority party now though and if they chose to pass Pay-go, they have the votes to do it.

They have no intention of doing so. It is all just politics, so don't try to blame shift because Bunning was actually trying to show a moment of responsibility in our government's spending, sir.

You are ignoring the political realities. The Dems technically have 59 in their caucus. Lieberman does not count because he votes Republican. That's 58. Other conservative Democrats like Baucus, Lincoln, and Nelson generally vote with the other side. So, if no Republicans support Pay-Go, and filibuster (which they do for everything) then it can't pass.

So, once again, you need to put the blame where it is deserved...on the GOP. They know that politically - with the help of the media - they can blame Democrats for failing to pass PayGo (as you are doing) while ignoring the fact that they are filibustering the bill.

It's sad how easily the media gets manipulated by Republicans. But it is shockingly common.

He was just trying to make sure it was payed for before it passed? I'm sure he everything was paid for when we were hemorrhaging money to pay for the USELESS Iraq War right?

So the Republican moral is, for oil billions, but for fellow Americans "TOUGH SHIT."

Douchebag indeed. This piece of trash is a criminal.