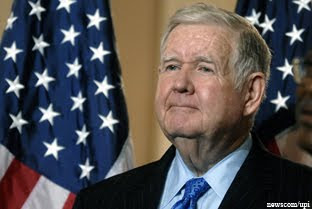 Pennsylvania's longest serving member of Congress, Rep. Jack Murtha (D) has passed away at the age of 77. The conservative, hawkish Democrat became the darling of the anti-war left when he (wisely) turned against the Iraq War in 2005. He became a target for the worst that the right wing hate machine has to offer for his candid assessment of the war. He will be missed.

“Jack and I served together for over 30 years, and I have never seen a more valiant defender of the men and women of our armed forces nor a more steadfast advocate for our country’s unequaled national defense. Jack was a true patriot, and the Congress will be a much lesser place without him. His passing is truly a cause for great sadness, and our hearts go out his family and his second family: his congressional staff and the members and staff of the Appropriations Committee." -- Rep. Jerry Lewis (R-CA).

"While Jack was always known as a military hawk, he became a leading voice in the effort to bring an end to the war in Iraq, and it is in no small part due to his work in this area that America is now on track to removing all combat troops from that country by this summer.” -- Rep. Ed Markey (D-MA)

Attention: I just went ahead and turned off comments on this one.
Posted by Dave Splash

I know, and more importantly any politically tuned in people know exactly what Mr. Murtha said and did in the past.

I wouldn't wish hateful things on him, and my condolences do go out to his family, but that being said he was not a statesmen and certainly not a conservative defender of our troops. Delete away, if you deem necessary.