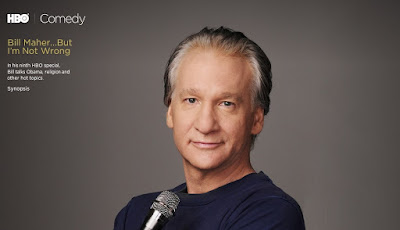 In case you hadn't received the memo, tomorrow is my birthday. No biggie. Just another day. Basically. If it's not your 16th, your 21st, your 40th or 60th, I don't think birthdays are all that important. Having said all that, how psyched am I that Bill Maher's newest comedy special, But I'm Not Wrong, premiers on my birthday?!

This won't be my first birthday with Bill. In 2003, I was in Los Angeles for my birthday and ending up seeing a live taping of Real Time. In fact, if I remember correctly, I wasn't able to get the tickets until I pulled the "birthday" card, and the producer or whoever, gave me the tickets. Nice. And Jason Alexander from Seinfeld was one of the guests.

So, thanks again, Bill..

UPDATE: Politico has a new interview with Maher where he discusses the next season of Real Time (which begins Feb 19) and whether or not he will be criticizing President Obama on the show. Spoiler alert: he will.
Posted by Dave Splash

I used to like Maher. I did not always agree with him though. Now he has gotten so smug, arrogant, and condescending to those in disagreement with him that I can no longer put up with him.

Evidently he has used his beer bong to drink the Kool Aid now.

Don't get me wrong, I looooove how he gets right wingers in such a tizzy, but he has been quite critical of Obama in the short time he has been in office. He famously said in an interview with Larry King, "I like Obama, too, but let's not make it a religion." He was responding to a caller who attacked him for being too critical of Obama.

He's certainly no right winger, but I don't think it's accurate to imply he has some blind devotion to President Obama.

I agree. In fact, I'm guessing he will really be taking it to Obama this season for trying too hard to play nice with the GOP.

By the way, happy birthday!

My apologies for not saying it earlier; Happy Birthday Dave!