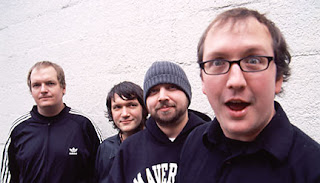 Cursive have announced that they will be releasing a brand new, stand alone single next month. The band is currently on another tour in support of its 2009 record, Mama, I'm Swollen, but has found time to record and release the new song.

The single will be called "Discovering America" and will be released via Saddle Creek Records on March 9. Money from the sale of the single will benefit the American Indian College Fund.
Posted by Dave Splash

Email ThisBlogThis!Share to TwitterShare to FacebookShare to Pinterest
Labels: Cursive