Mark This Date! I Actually Agree with Bill O'Reilly on Something 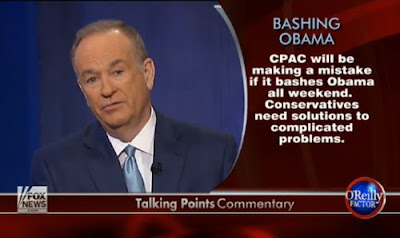 This is a weird day, for sure, because I have actually found something uttered by Bill O'Reilly to be correct. The guy has made a career out of being a wrongheaded, factually challenged, right wing know-nothing, but I guess everyone can be right once in a while.

On Bill's "Talking Points Commentary" last night, O'Reilly scolded conservatives attending the CPAC conference for spending their entire convention bashing President Obama, and not offering any actual solutions to the nation's problems. While this is smart advice, I doubt the numskulls who attend this convention have thought about those problems in any other context besides dreaming up a way to blame Obama, specifically, and liberals in general. That's been the M.O. for the Republican Party for the last 13 months, so it is doubtful it will change.

"There are two kinds of political attacks," O'Reilly said. "The personal, meant to diminish the human being and criticism of policy, meant to persuade people, the person in power is doing a bad job. Of course, there's nothing wrong with policy criticism or satire. That's a hallmark of America. But the personal stuff is cheap. And we're seeing more and more of it....But if CPAC makes a weekend out of bashing Obama, it will be making a big mistake. In order to regain power in America, conservatives must come up with solutions to complicated problems."

I agree that simply attacking Obama and the Democrats will not solve anything or motivate people to do the right things.

On the other hand, there are plenty of examples where the GOP has ideas and plans to address many of these issues and are assumed not to by the left. The GOP plan for health care is a good example of this.

But I still think the Republicans have no real idea what bi-partisanship actually means. They seem to think that for bi-partisanship to take place, the Dems must adopt 100% of their ideas and use none of their own. Cantor and Boehnner are still trying that by threatening not to show up to the health care summit unless the previous bill is completely disregarded (and now after demanding a televised debate, many GOPers are questioning why it has to be televised).

The folks at CPAC are even less willing to be bi-partisan, so they only resort to bashing.