Maddow vs. Beck: And the Winner Is... 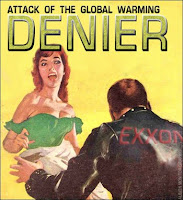 Last night Rachel Maddow had a fascinating segment towards the end of her show. A few days ago, she criticized a number of Republicans and talk show hosts on Fox News for arguing that the large amount of snow that has fallen on the East Coast somehow "proves" that climate change is false. Naturally, those with an IQ above 70 know that it proves nothing of the sort, and in fact, shows the validity of the science. However, when it comes to conservative commentators, finding one with an IQ above 70 is a difficult task.

One of the commentators named in the segment was Fox News' Glenn Beck. Beck has spent much of his career mocking the idea of climate change, personally attacking former VP Al Gore, and highlighting the dubious "science" produced by the oil industry and its backers. Just as Maddow said he did, Beck argued on his show that the heavy snowfall "proves" climate change is a lie. However, for some reason, Mr. Beck really took offense to the characterization of him as a global warming denier, and said that Maddow was lying when she stated he argued that snow = no climate change. It wasn't simply an assertion of hers, though, she provided video and audio evidence of Beck making that claim and dozens more exactly like it.

The following video can get confusing at times, as the two hosts go back and forth trying to prove the other one is the liar. However, no matter what your thoughts are on climate change, I don't think it is possible to watch this entire video and come to the conclusion that Maddow lied about Beck. She didn't. Beck said exactly what she claimed he did on more than one occasion. Maddow also pointed out that she has received hate mail throughout her career, and she knows that comes with the territory. But since this spat with Beck, she has been receiving death threats from Beck's most rabid fans. She calmly and rationally proved her case, showed that Beck did lie, and then politely asked Beck to "back off." It was quite a powerful piece of television. WATCH THE ENTIRE VIDEO before making any comments. It's nearly nine minutes, but the ending is the most important part.

Visit msnbc.com for breaking news, world news, and news about the economy

I do not know and do not care which talking head lied.

As for global warming, climate change, or whatever the wingbats are calling it this week, it does not exist! (At least not the anthropogenic type of global warming.)

Yet again this week, an idiot scientist with East Anglia or the IPCC or whatever institution of the left that foisted this falsified science upon us admitted that their has been no global warming since 1995 and that he has "lost" much of the data that he had that supported Al Gore's erroneous "hockey stick" graph showing rapid temperature climbs this last century.

Like the rest of the leftist agenda, this "science" is unraveling and the truth is being revealed. Twenty years from now global warming will be science in the same way that alchemy or astrology is science.

And Paine enters himself into the Flat Earth Society. Sorry, friend, on this issue there is no middle ground.

To deny the facts on climate change is just utterly ridiculous. No one on the right (or anyone really) has ever "disproven" the science. It is fact, it is happening. The only dispute left is how to go about fixing it.

I'm afraid you appear pretty ridiculous on this one, man.

Yeah... It's true because Rachel Maddow says it is. The hacked emails from the scientists that are doing the research prove that they have manufactured, falsified, and ignored contrary data on this, Dave.

I know the state-sponsored media has not hit this very hard, but that doesn't change the facts.

Ummm...nice try. Notice how you avoided the actual subject of the post: that Glenn Beck said that snow disproves climate change, he was called out on it, and then he lied. You can at least agree that he is a liar, right?

As for those so-called smoking guns of an email, it is not a surprise that those who don't understand the basic concept behind global climate change or climate science, would then be fooled into believing that those emails prove or disprove anything.

According to Real Climate.org, "More interesting is what is not contained in the emails. There is no evidence of any worldwide conspiracy, no mention of George Soros nefariously funding climate research, no grand plan to 'get rid of the MWP', no admission that global warming is a hoax, no evidence of the falsifying of data, and no 'marching orders' from our socialist/communist/vegetarian overlords. The truly paranoid will put this down to the hackers also being in on the plot though.

Instead, there is a peek into how scientists actually interact and the conflicts show that the community is a far cry from the monolith that is sometimes imagined. People working constructively to improve joint publications; scientists who are friendly and agree on many of the big picture issues, disagreeing at times about details and engaging in 'robust' discussions; Scientists expressing frustration at the misrepresentation of their work in politicized arenas and complaining when media reports get it wrong; Scientists resenting the time they have to take out of their research to deal with over-hyped nonsense. None of this should be shocking."

As for your contention that the climate is always changing, yes it is. But when, for example, the ice shields in Greenland melt as much in the last ten years as it did in the previous 125,000, only someone in total denial would chalk that up to something natural.

As the ice melts, the sea levels rise, and weather gets more extreme. Taken even further, as sea levels rise higher, tens of millions of people will be forced to move inland before their state, country, island, gets swallowed up by the sea. Go visit Florida while you can, TP, as it won't be around for your grandkids. It will be underwater.

Thereby proving my point that even with clear evidence of scientists cherry picking evidence and manipulating data to fit their agendas, the left still holds fast to their false religion of global warming.

I swear, the head "scientist" behind all of this could have a pang of guilt because of this hoax, come clean and tell the world that they made this all up and the left would STILL wonder how Exxon was able to bribe him to say that!

By the way Dave, think about the physics of what you suggest for a moment. If you have a glass full of ice water and let it melt, does the water overflow the top of the glass?

Really, man, did you sleep through science class when you were in high school?

Do a little more research on the subject besides watching Fox. Your glass of water analogy is really pretty pathetic and totally off point. Rising sea levels are a fact, they are not in dispute (even from climate change deniers). Tens of millions of people now live in places that will be underwater if they continue to rise. Makes perfect sense. Sorry I can't dumb it down any further for you and Palin.

You guys will grasp at any silly straw just to avoid admitting you are wrong. It's sad, actually.

It's also funny how you on the right interchange between there "needs to be more research" or "the dispute is whether its man made not whether its happening" to it's a "hoax" on a whim.

Keep clinging to your "George Soros is trying to destroy capitalism" conspiracy nonsense, and the thinkers in the US will handle the policy making.

Glad to see that you still have faith in our politburo making such world-altering decisions for us based on a political instead of a scientific agenda. I sure as hell do not.

I guess you are getting administrations confused. You see, since Jan 09, science is back. It is no longer subjected to approval from Exxon Mobil, the Heritage Foundation, or Chamber of Commerce. That is how Bush handled things, so I understand your confusion.

We now have a president that does not subject science to a political litmus test.

This whole debate reminds me of the debate over cigarettes. For decades, conservative business forces denied smoking caused cancer, spent millions denying any link, hired its own "scientists" to refute the facts, and viciously attacked anyone who disagreed with them.

Now many of those same forces are employing the same tactics against climate change.

You don't think cigarettes are safe, do you?

Never did think they were safe. Anyone that takes his first puff and starts choking should know somethings wrong with cigarettes.

Figuring out there is something wrong with your "science" of global warming is not a whole lot tougher than that is though.

Further, I don't know your background, Dave, but I would venture my science education far outstrips yours, sir.

I don't question your science education. But in my experience, so many of the folks who take the position that you do - global climate change is a hoax invented by liberals and Al Gore for no other reason than to bankrupt the US and kill capitalism - don't know much about science. Clearly you don't fall into that category. No disrespect intended.

I appreciate the comment and civility in the debate, Dave. Thanks.