The Lunatics Are Coming To DC!! 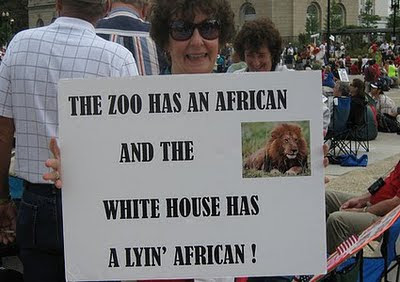 Oh, man would I hate to be in DC this week. The Conservative Political Action Conference (CPAC) starts this morning in Washington, so every single nutbag on the right has descended on the city. More unadulterated bullshit is espoused in a single minute at CPAC than a normal person would be subjected to in an entire year.

So far, the keynote speaker Marco Rubio (a Florida political insider pretending he is some unknown fresh face who is running for Senate) has already endorsed torture, and then promised "hope and change" if conservatives are elected. Funny, but I thought wingnuts hated all that "hopey-changey stuff."

Enjoy it while you can Rubio. You may beat Charlie Crist (who used to be a darling of the right until rumors surfaced that he was gay, and naturally, the right can't ever support a gay candidate or suffer the wrath of the wildly homophobic base) in a primary, but winning statewide on a pro-torture, tax cuts for millionaires, privatize social security platform (i.e. Bush-ism) is unlikely. 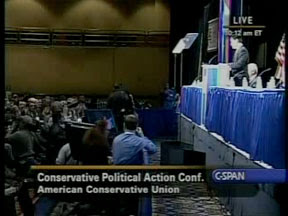 UPDATE: Those wingnuts sure do love those teleprompter jokes. Marco Rubio did one...while standing in front of a teleprompter. I guess the concepts of hypocrisy and irony are things conservatives just don't understand
Posted by Dave Splash

Thanks for the objective update, Mr. Olberman! :)

Why do I have to be objective? I'm not a news organization. I think teabaggers are lunatics. Is having an opinion other than the one endorsed by Rush and Palin not allowed anymore?

Are you claiming objectivity on your blog? All that Obama is a socialist nonsense doesn't seem too objective to me.

At least Msnbc makes it pretty clear they have a liberal slant. Fair and balanced my ass fox news.

I think conservatives these days are much like those old creationists mobs before this whole intelligent design crap came along. Of course fortunatly they won't always be this radically right wing. Sooner or later the republican party will be a reasonable political party again it is just gonna be a while i think.

Not sure I agree that MSNBC is so liberal. In comparison to Fox, pretty much anything looks liberal. But folks like Pat Buchanan and Joe Scarborough are on the air everyday, the network frequently cowtows to pressure from the GOP (i.e. removing Chris Matthews from election coverage in '08), and has more Republican guests than Democrats. Their opinion shows are liberal, to be sure, but at MSNBC there is actually a difference between the news and opinion shows.