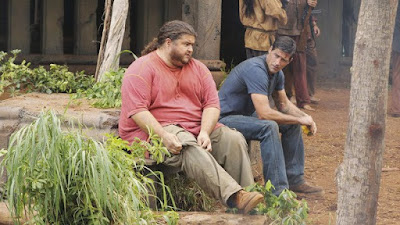 All things considered, this week's LOST episode, "The Lighthouse" was a little on the weak side. There were some important things that happened, and we did gain a little insight into what happened to Claire after she disappeared. But, I was a little unsatisfied with this one.

For the most part, the focus is on Jack in this episode. And in this episode, we begin to see the slight convergence between the two parallel realities of this season. The first instance of this occurs when Jack is changing clothes and notices the scar from when his appendix was removed. He has no recollection of this and asks his mother when it happened. She told him some story about when he was 7 or 8 and had it removed, but Jack clearly did not recall this. Losties know that Jack had his appendix removed on the island by Juliet. There are a few other instances of Jack not remembering things from his past, as well.

In the "new" reality off the island, we also see that Jack has a son named David. He appears to be about 14 or 15. He is still divorced as he was before, though whether or not he was married to the same woman was not revealed. Jack and his son have a strained relationship in much the same way that Jack and his father did. But unlike in that situation, here Jack makes sure to tell David how much he loves and believes in him. While Jack and Christian's "gift" is surgery, David's seems to be in music. In this episode, we see David Shephard audition for a prestigious music school. It is at that audition that we see another convergence of the two realities, as Jack meets Dogan, who also has a son auditioning for the school. However, on the island, Dogan was a Chinese national and was "brought" to the island from there. There was no mention of him ever living in the US.

Back on the island, Jacob appears once more to Hurley, and he gives him a mission to complete. As with everything to do with Jacob, this mission is shrouded in mystery and, to some degree, deceit. Hurley is told that someone is coming to the island, but they need help finding it. Jacob instructs him that he and Jack must help them by following his careful directions. They wind up at a lighthouse, and after climbing to the top, they discover some mysterious mirrors. In pre-electricity times, the mirrors would have been used to reflect light from the lighthouse out to nearby ships. In this case, it was used by Jacob to see his "candidates" off the island. Jack then discovers that Jacob has been watching him since he was a young child. He is rattled by the discovery, and smashes the mirrors.

This apparently was the point, as Jacob is not at all upset about his lighthouse being rendered unusable. In fact, he tells Hurley that he really wanted to get those two as far away from the Temple as possible. Elsewhere on the island, Claire continues to take care of the injured Jin. She captures an "other" and brings him to where she lives. After interrogating him about the location of her son, she kills him. In an effort to save the man's life, Jin tells Claire that Kate has Aaron, and that the others had nothing to do with it. After the murder, Jin retracts that, and says he was lying to spare the man's life. A confused and angry Claire says she is relieved. If Kate did have Aaron, Claire would have to kill her.

The only other notable event in the show comes when Jin asks Claire if she has been alone for the last three years. She tells him that she has not been alone, as her "friend" is with her. Jin seems confused by this until Locke shows up. Claire says he is her friend, but he is not John Locke. This would seem to re-enforce the contention by Dogan and the others at the Temple that Claire has been "infected" in some way by a darkness. This is the same darkness that has taken over Locke, and may be taking over Sayid, as well. Or maybe not. Locke (or the smoke monster or the man in black) may not have "infected" Claire at all. It is just too early to tell.

What I took away from this episode is that Jacob wants Jack to be the final candidate and replace him. The exercise of going to the lighthouse was intended to help Jack figure out what he has to do in this regard. And if Jack is set to replace Jacob, then he will need help to defend the island from Locke, and conceivably, Claire and Sayid. Not sure how Hurley fits into all of this since he is only one who can see and communicate with Jacob.
Posted by Dave Splash