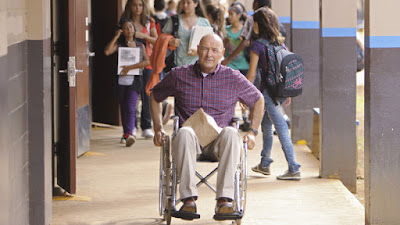 Now that is what I'm talking about! Tuesday night's LOST featured exactly what I like about this show. On Episode 4, "The Substitute," the focus was on my favorite character, John Locke...or what Locke has turned into.

For once, an episode of LOST actually solved some mysteries instead of just creating new ones. Yes, there were more questions raised than answered (as usual), but some very important things were finally explained. First and foremost, we finally find out the origin of the numbers 4, 8, 15, 16, 23, & 42. As any devoted LOST fan knows, these numbers have held a prominent place in the mythology of the show. They were the numbers Hurley used to win the lottery, they were the numbers etched into the door of the hatch, they were the numbers Desmond spent years entering into a computer to save the world, and on and on.

Turns out, the numbers were carved into a cave by the mysterious Jacob, and they correspond to his "candidates." There were hundreds of names and numbers on the cave walls, but most had already been scratched out. A few names still remained, most notably "Ford," "Reyes" and "Shephard." So, what are these folks candidates for? Apparently, to replace Jacob as the protector of the island. All of them had been visited by Jacob at some point in their lives, though they had no recollection of actually meeting him. Locke, you may remember, was also visited by Jacob right after he was thrown out of the window by his father.

The explanation of the numbers and the candidates was given by the entity occupying Locke's body. He was explaining them to Sawyer (Ford), after telling him that he could explain why he came to the island in the first place. Locke then went on to tell Sawyer that he should join with him, as there is no need to protect the island anyway. Beyond this explanation, how the numbers came to be used by Hurley or Desmond or the Dharma Initiative is not explained.

Not too much else happened on the island other than a young boy suddenly appearing out of nowhere in the jungle. The boy startled Locke, and he was surprised Sawyer was able to see him. Who was this kid? Was it Aaron? Was it Jacob as a young boy? Who knows. I guess that is just another mystery to add to the long, long list.

Off the island, in the parallel storyline, Locke is shown at his job at the box company. But things are a bit different. For one, he is married to Helen. Secondly, after Locke is fired from his job, he inadvertently meets Hurley, who is now the owner of the company. Hurley tells Locke to go to an employment agency he owns, and they will "take care of him." During his interview at the agency, a frustrated Locke asks to see the supervisor. The supervisor turns out to be Rose. She gets him a job as a substitute teacher. On his first day, Locke wheels himself into the Teacher's Lounge and meets fellow teacher, Ben Linus. Yes, the same Ben Linus. Obviously, as far as Locke is concerned, this new reality off the island is somewhat better than the one Locke lived in earlier.

Strangely, for this season, it is starting to look like all of the castaways are better off in this new reality, and worse off on the island. We haven't really seen what life is like off the island for Sun & Jin, Jack, or Sawyer yet, but I suspect the same is true for them. Or is it?

The trailer for next week's episode (see it at abc.com) shows Claire, back on the island, eager to interrogate an "Other" she captured about the whereabouts of her son. Interesting...
Posted by Dave Splash