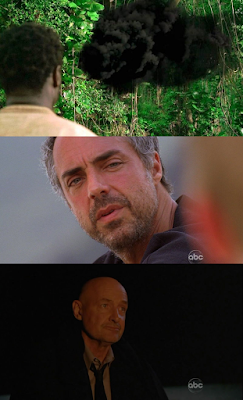 The final season premiere episode of Lost aired two days ago, and it is still sinking in with me. The intricacy and depth of the show's storyline still amazes me. It amazes me not because I didn't think writers were capable of writing such a complex and compelling story, but it amazes me that it has such a large and devoted audience.

At the end of last season, the "Oceanic Six" had returned to the island in an attempt to save all of those left behind. Some were transported to the island in 1977, and some in the present day. The ones in the 70s quickly met up with those who remained. They had joined the Dharma Initiative, and had built a nice life for themselves there. Those Dharma folks - Sawyer, Juliet, and Miles - found a way to get Jack, Kate, and Hurley in, but when Sayid appeared a few days later, he was taken prisoner. Obviously, the appearance of Jack, Kate, et al caused problems for their friends who had established trust with the Dharma people.

By the end of the season, they were on the run from Dharma, and were enlisting the help of the "Others." Jack, Sayid, Richard Alpert and Eloise Hawking (in the 70s) decided to follow Faraday's plan to detonate a hydrogen bomb at the Swan station in order to make everything that had happened (crashing on the island, etc) null and void. Sawyer, Kate, and Juliet opposed the idea, but went along anyway. The very last scene showed Juliet striking the bomb and it detonating.

To me, the more interesting storyline was the one taking place in the present day. Locke, who had been killed at the end of season four by Ben, was suddenly among the living. Ben, who was not supposed to ever return to the island, had returned. And Sun, who only returned to find her husband, soon realized that he was 30 years in the past. Locke quickly re-established himself as the leader of the Others, but his insistence on seeing Jacob immediately shocked both Ben and Richard Alpert. What was even more shocking was that Locke revealed that he wanted Ben to kill Jacob.

In a third parallel storyline, the remainder of the passengers of Ajira 316 (the plane that brought the initial castaways back to the island in 2007), were trying to find either Richard or Jacob to show them what they were transporting. They had Locke's body in a coffin, and needed it to prove that whoever was walking around calling himself John Locke, was not actually Locke.

Fast forward to this season, and we have two separate storylines, only this time, they are not parallel (I don't think they are anyway). In one, the H-bomb detonation worked, Oceanic 815 never crashed, and the castaways never meet. Basically. What you notice is that certain things are different in this version of events than they were supposed to be. For example, Hurley considers himself the luckiest guy in the world, whereas he had referred to himself as "cursed" prior. Desmond was on the plane, and for a time, was seated next to Jack. Locke, paralyzed and in a wheel chair, has a brief encounter with Jack who gives him his card and offers him a consultation on the house. There were other differences as well.

Back on the island, those same castaways are present and dealing with the aftermath of the bomb detonation. Juliet, trapped in a mine shaft, is rescued only to die from her injuries a few minutes later. Before she died, she tried to convey the message that, "it worked." What exactly "worked" is open to interpretation, as they are all still on the island. What year they are in is also unknown.

Meanwhile, Locke had convinced Ben to kill Jacob - and now Jacob is dead. Ben, shocked at what he had done and curious as to what Locke has become, sees firsthand who Locke really is. When the transporters of Locke's coffin storm in to try and save Jacob, Locke disappears, and the "smoke monster" quickly appears. It would seem that when the monster takes human form, it now appears as Locke, whereas earlier, it appeared as the "man in black" (see above middle picture). This man in black is a centuries old nemesis of Jacob, who has spent years trying to find a "loophole" in their agreement that they won't kill one another. The true nature of the relationship between this man in black (now Locke) and Jacob has not yet been revealed.

But is Jacob really dead? Hard to say. He appears to Hurley and tells him that he must get the critically injured Sayid to the temple, and he can be saved. So, on the advice of this phantom, Hurley, Jack, Kate, Jin, Miles and Sawyer take Sayid to the temple. Upon entering, they are met by a number of ancient looking soldiers who are protecting the temple. They take Sayid into their version of holy water and drown him. The rest of the castaways are shocked and begin to wonder whether or not they, too, will be killed. At the end of the episode, Sayid comes back to life and asks what happened. But, is he really Sayid?

Locke, in his current form, emerges from Jacob's statue/home with Ben. The attempt to stop and/or kill him was unsuccessful. Locke makes a comment to Richard that lets him know his real identity. Richard, shocked, is then struck down by Locke in front of everyone else.

That's basically what happened, but there are millions of questions. What year are Jack, Kate, etc in? Are both storylines real? Is Jacob dead? What does that mean for the future of the island and of the Others? Is Jacob now in the form of Sayid? Is that Jacob's "loophole?" Didn't the smoke monster protect the Others from outsiders? What is its real purpose? How do all of the initial castaways reunite? Do they ever? There are plenty more.

It would appear that the final season of Lost is going to be a doozy.

UPDATE: Blogger and communications professor Paul Levinson asks (and then answers) some of the questions on his blog.
Posted by Dave Splash