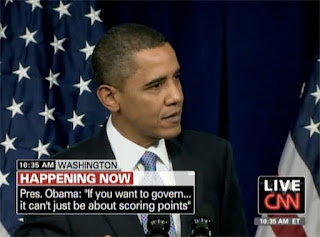 Like most conservative people, the right wing news outlet Fox News has a very difficult time handling information that does not mirror their own personal opinions and beliefs. Facts that don't support the conservative mental narrative are dismissed as "liberally biased" or a lie. This insufferable whining from the right has been a media fixture for the last few decades.

But Fox is clearly feeling the heat from its dishonest editorial stance regarding President Obama. The network has invested heavily in blaming Obama for the myriad of failures from the previous administration: the massive debt, the failure to stop Bin Laden and Al Qeada, the banking collapse and subsequent bailouts, etc. No matter what the problem is, it all started on Jan 20, 2009 according to Fox. The network has been heavily criticized for its disingenuous editorializing during its so called "news" programming, and Fox News president Roger Ailes claimed last week on ABC's This Week that his "war" on the Obama Administration has ended. Uh huh.

President Obama's job approval ratings did take a tumble toward the end of 2009, yet his personal approval and likability remained very high. Fox sought to stop that with a series of personal, below-the-belt attacks. They tried the old "soft on terror" meme, yet that failed because actual facts show that he is having more success killing Al Qeada and Taliban than his predecessor had. Furthermore, he added nearly 50,000 more troops in Afghanistan (a move described by conservatives before the announcement as essential, but after the announcement as "weak.") The network advanced some bogus story about the Christmas bomber refusing to give intel to his interrogators, yet we know as of yesterday, that he has been cooperating the entire time, and has given vital information. Fox, though, criticized this success because no torture was involved.

The attacks on Obama never end, and are getting more insane and paranoid (i.e. Glenn Beck's claim that FEMA was creating concentration camps for conservatives, or Beck's claim that Obama holds a "deep seated hatred for white people"). The network uses the word "socialist" more than president when discussing President Obama. It has been an unprecedented assault on a sitting president of the United States.

Last week, the obviousness of my point was made crystal clear to anyone with an IQ above 70 when Fox cut away in the middle of President Obama's historic Q&A with House Republicans. The conservative Congressmen attacked the president with their factually challenged talking points masked as questions, and the president calmly, rationally, and (most important) factually refuted them. It was a pretty impressive appearance without question. Fox cut away because the president was schooling Republicans and showing the inherent dishonesty in their attacks. That goes against the narrative that Fox has been pushing for the last two years about Barack Obama. So, the "fair and balanced" network stopped coverage of this live event, and instead brought on a panel of conservatives (with no one to "balance" them) to attack the president.

Today, President Obama is holding a similar Q&A with Democratic members of Congress. CNN, C-Span, and MSNBC are carrying it live. Fox is not. Instead, Fox covered important stories like, "Book Reveals Cat's Ability To Predict Death." They really did cover a cat story instead of the President of the United States.

No wonder so many on the right are so thoroughly misinformed. How sad. I guess that explains why the single least qualified person ever placed on a presidential ticket, Sarah Palin, is considered a hero and was hired by Fox News.
Posted by Dave Splash

This is why of course I always suggest thinking for one's self instead of taking your ideas from a pundit.

Ummmm....what? This event happened this morning. I wrote about it early this afternoon. Maddow goes on air at 9 pm tonight. Your thinly veiled accusation has no merit. And considering so many of the "points" you make come straight from Hot Air and Michelle Malkin, I'm not sure you engage in so much free thinking.

Splash, sometimes I wonder if you just cut and paste from HuffPo or Daily Kos. You are so over the top left-wing it is almost comical.

Obama is probably the most factually challenged president in modern history, and that is saying something considering that Clinton is in that grouping.

It is funny how Obama blames everything on Bush and then continues most of his policies such as the asinine spending, keeping Gitmo open, not ending the war in Iraq etc. etc. etc. Just curious, is there a statute of limitations on how long Obama can blame Bush when he is doing the same exact things in even larger proportions?

Do you really think some community organizer that has NEVER reached accross the aisle to write bipartisan legislation with anyone, unless they agreed with the leftist ideals of the bill, would solve all of the country's problems?

The only thing this fool is good at is the aggressive use of speeches.

I think it amusing that you find Palin unqualified for office despite her actually having a record of accomplishment as a mayor and a governor with the highest approval ratings of any governor of any state to show for it.

Obama talked about having visited 57 states on the campaign trail but the statist media calls Palin dumb. Absolutely amazing!

Look at it this way, you're a prettier girl than her.

Thanks for the comments, guys. You both perfectly illustrated my point about how the right is simply incapable of dealing with any facts that do not conform to their extremely narrow world view. If Limbaugh ain't selling it, then you ain't buying it.

Real life examples of this sheep like behavior and slavish devotion to the failed ideas of the past make it that much more vivid for those fortunate souls who do not have to hear the same, tired right wing drivel every day.

I appreciate the way you guys - Paine especially - helped make my argument.

I don't listen to Rush Limbaugh... we don't exactly get him over here in Germany.

But we get Rachel Maddow so you'd be happy.

Right because obviously the internet doesn't work in Germany. Whatever you say, buddy.

Rush has never really been my thing.
I work during talk radio hours.