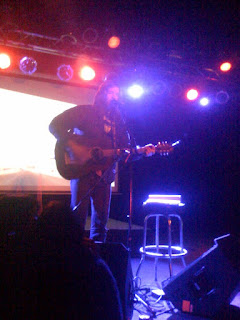 Had another wild and unpredictable night with Evan Dando at last night's show at Waiting Room. You may remember that when Dando was last in town with The Lemonheads in December 2006, the show went along smoothly until the acoustic encore. At that show, some obnoxious and overly enthusiastic fans were singing loudly in the front row. Something set Dando off, and he abruptly stopped the show mid-song and left the stage. Concert over.

More than three years later, we nearly had a repeat performance. I must confess that I missed the first 30 minutes or so of the concert because I was wrapping up my radio show. When I arrived around 11 pm, Dando was on stage and barreling through his repertoire at breakneck pace. He was playing solo acoustic, and as soon as one song ended, he began the next one. No break for applause. No banter with the crowd. Almost.

Some friends of mine were sitting in the back, at the bar, and said that Dando had already played "everything." Regardless, I went to the front hoping that a few of my faves had yet to be played. I contemplated yelling out for "The Great Big No," "Down About It" or "Hospital," until I saw what happened when someone yelled for a song he already played. This is where the weirdness began.

When Dando said he had already played the guy's request, the audience member said something to the effect of "just play it again." This got a strong "Fuck You" from Dando. In fact, it was two "fuck you's." It seemed like that would be the end of it, yet that same guy (and his two female companions) would continue to agitate Dando. I couldn't really tell what they were doing or saying since I had gone back to the bar. From what I could tell, the three were quite drunk, and kept wanting to talk to Dando while he was playing.

After nearly stopping the show twice earlier, Dando finished his set and walked to the dressing room. Next thing I knew, one of those obnoxious girls from before was screaming at the top of her lungs and demanding to talk to Evan Dando. When he came out, she began to drunkenly berate the singer. She was upset because the bar cut her off, and she had been told it was because she was bothering Evan. She wanted to know what she had done that warranted this (though it was pretty obvious why at this point). One of the club's bouncers came over and explained that Evan had nothing to do with the decision to cut her off, that it was the bar. She didn't seem to care, as she kept complaining about it. She said she was "bothering" him because she wanted to know if he needed a drink, or if he was hungry, and that she had driven for hours to come to the show. Dando then said, "thanks for coming," and walked away. I guess that is the best way to deal with crazy, drunk chicks at your concert.

While I enjoyed the part of the show that I was able to see (Dando's voice sounded great), it was a little disappointing that he does nothing to engage or even acknowledge the audience. He just barrels through song after song, playing each at the same pace, and keeping his eyes closed most of the time. You would think that after performing for more than two decades, Evan Dando would be a little less uncomfortable on stage. Guess not.
Posted by Dave Splash

Email ThisBlogThis!Share to TwitterShare to FacebookShare to Pinterest
Labels: Concerts, Omaha, The Lemonheads

Shows are a two way street- if the crowd sucks, it's hard to be the only one bringing the energy. And, how insulting to get a request for a song that the artist already played. Geeze.

Agreed on both points, Mr. Anonymous. But people at bar shows get drunk and act stupid, or say stupid things. He's been in this business since 1986. I doubt that was the first time it had ever happened.

He wrote a song about it. Nice!
http://www.youtube.com/watch?v=viXTWpBsxBA