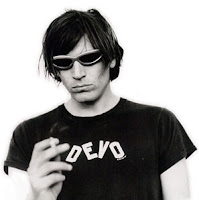 There is one really special, mandatory, must-see concert this weekend, and that is Evan Dando on Sunday night (Feb 21) at The Waiting Room. Dando was (or maybe still is) the leader of 90s alt-rock legends, The Lemonheads. He helped form that band in 1986, and was the only original member left when it disbanded in the late 90s.

Since that time, Evan Dando has released one solo album, Baby, I'm Bored. He then re-formed The Lemonheads in 2005, though he was still the only original member in the group. Two new Lemonheads albums have been released since then.

Dando is performing as a solo artist this Sunday. Though he may be performing with a band, it is much more likely that he will be performing by himself with just an acoustic guitar. Either way, this promises to be an amazing show. The set list should feature many Lemonheads classics.

Tickets are still available for $13. Opening the show is Adam Hawkins. See you there.
Posted by Dave Splash

Email ThisBlogThis!Share to TwitterShare to FacebookShare to Pinterest
Labels: Concerts, Omaha, The Lemonheads